What You Don’t See Still Exists

Pretty obvious statement, I know, but a reminder doesn’t hurt. This has been a very discouraging year for some wildlife, particularly insects such as monarch butterflies and bees. Even more discouraging is that the ramifications extend beyond this year.  Lower insect populations mean lower bird populations in the future. Birds whose populations were already low may reach critically low levels, levels that make it hard to keep breeding.


Last week I happened to look out my window at just the right moment to see an unusual bird flitting through the bushes nearby. I snapped a quick picture through the window screen. Not a good picture, but it was enough for me to identify that it was a hooded warbler. He had a few companions with him and I got a better picture of one of them. It appears to be an immature chestnut-sided warbler.

As the birds searched for (and found) a few insects to eat, I was glad that my plants had a few caterpillars on them. I was glad I had not used any pesticides. My friend JoAnn said that warblers come through in the morning this time of year as they migrate. They stop and rest for a while and refuel on insects (warblers are insectivores). I have seen small birds in the tops of trees some mornings – they always move quickly, as if searching, and chatter amongst themselves.

If I hadn’t seen these by my window at just that moment (they were quickly gone) then I never would have known that they come through. Or that they exist.


Other things are overlooked. Tiny blue curls (Trichostema dichotomum), blooming now, are hardly noticed. Should they go extinct, would we notice? The species exists for a reason – we know that it supports native bees for example.


More people notice the colorful partridge pea (Chamaecrista fasciculata). It is considered a weed by most despite its cheerful yellow blossoms.

It is a host plant for sulphur butterflies such as this pale cloudless sulphur that gracefully floats through the late summer garden. I had a lot of them last year so I’m glad that someone let their weeds live.


I went out to walk the dog for the night and a small grey moth flew away from the plant I brushed past. Without that encounter I would not have known it existed. Yet it and many other species of similar moths do exist and they play a role in our ecosystem.

Perhaps one like it laid the egg that became this caterpillar now munching on the Conoclinium coelestinum. Perhaps this caterpillar will be the one to give tomorrow’s visiting warbler the energy to go a little further towards its winter home. I likely will not even see the encounter. But it doesn’t make it any less real.

Tadpoles are swimming in a bucket that holds water from our heavy summer rains. I can watch mosquitos lay their eggs (while their friends bite me). You probably think mosquitoes are useless, but they are actually the perfect size meal for hummingbirds and an important source of protein for them.  I hope the tadpoles are eating some of the larvae in the water, helping the frogs reach adulthood. It's part of the process. 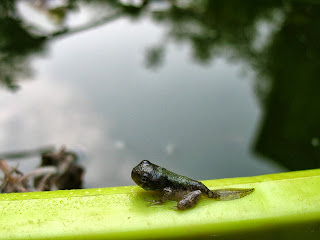 The natural world around us is complex, but each piece carefully intersects with another. It’s good to remember that because our stewardship is important. So that even though we don't see them ... they will still be there.


Posted by Ellen Honeycutt at 8:00 AM