By the Gurgling Stream


Last weekend I sat by a gurgling stream in a beautiful State Park in north Georgia and thought how lucky I was to be there among such beautiful surroundings. Children shrieked with laughter nearby as they played in the edge of the water. Tall trees stood by the stream, creating shade and cool green beauty. I paused in my task for a moment to appreciate it all - and then went back to pulling out invasive plants. 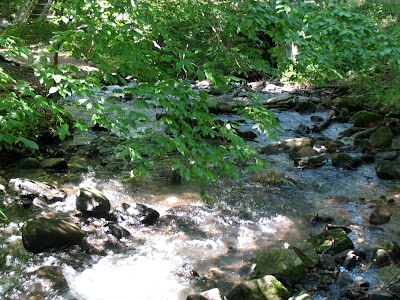 Here amongst the beauty and the fun, invasive plants have moved in, stealing resources from the native plants that made this place so unique. I was there with a group of nine people from the Georgia Native Plant Society to pull stiltgrass (Microstegium vimineum) on this late summer day. We waited to do this in late summer so that we can eliminate this annual grass before it flowers and set seeds but also late enough in the year that it doesn’t have a chance to grow back.

We also pulled out any Japanese honeysuckle that we found (much reduced from our earlier work on it), and several people worked on an area of kudzu (Pueraria montana) that was growing right in the middle of the park. We used no chemicals, so unfortunately that will be back.

For the annual grass, repeated removals works fairly well. We could see improvement from our work last year.

Despite all that gloomy talk, the area is lovely and the waterfall was busting out with all the moisture we've been having. Visitors crowded the park, many stopping to ask what we were doing or to ask us to identify another plant.

I showed several folks how the exploding seed pods of touch-me-not (Impatiens capensis) earned that plant its common name. Moisture-loving plants like jewelweed (its other common name) were so big and lush that they were actually shading out the stiltgrass. We had little work to do in that area.

Plants are not the only thing to see - butterflies, bees, beetles and even a few snakes were out to delight children throughout the trails. Kids would race by, but if you offered to show them a critter they put on the brakes.


One of our volunteers discovered a copperhead close to where she was working on the trail. I wondered later how many times that snake showed up on Facebook by the end of the day!

We decided to leave the weeds around him for another time.

Still the plants are important (and beautiful) and controlling the plants that would love to out-compete them is an important task to those of us that love native plants.

Parks have limited personnel and funds to deal with invasive plants on a regular basis. We noticed that several areas were being mowed/weed whacked and that has helped.

But sometimes good plants get mowed down as well since selective removal is much more time consuming. Volunteer help, often through their "Friends of" group, is an important resource for them. Knowledgeable plant folks can really make a difference.

If you live near a park, I encourage you to get involved in keeping these areas preserved for the native flora for which they were intended.
Posted by Ellen Honeycutt at 8:24 AM