Several months ago I wrote about some of the plants found at a small rock outcrop area. Earlier this month I had a chance to visit a very large granite outcrop in Georgia and explore some of the special plants there - in the company of a knowledgeable trip leader and fellow members of the Georgia Botanical Society.

Heggie’s Rock is a 130 acre outcrop in Columbia County, about 20 miles from Augusta, GA. The Nature Conservancy has created a Preserve that encompasses about 101 acres of that outcrop. Heggie’s Rock was designated a National Natural Landmark in 1980, one of only 10 such designations in Georgia.

According to the TNC website:  “The preserve is near Little Kiokee Creek which joins the Savannah River about eight miles downstream from the preserve. While the preserve includes a perimeter forest of oaks, pines and hickories, it is the granite outcrop, Heggie’s Rock, which dominates. It is here you see exposed granite, lichen and moss covered rock, soil islands and the beautiful vernal pools, or dish gardens, which support rare and unusual plants, and capture the imagination.”

Heggie’s Rock is named for Archibald Heggie, a Scot who acquired the property around 1808 through his wife, Martha Ramsey, whose grandfather built a grist mill on nearby Little Kiokee Creek. In 1983 The Nature Conservancy purchased it from Robert Pollard, a lumber company executive who had bought the land in 1981 to protect it from quarrying. It had been owned by two quarry companies since the 1950’s but thankfully never quarried.

As I said in my earlier post, special environments like these contain populations of very special plants, some of which don't grow in any other environment. It was early in the year when I wrote that other post, so now I can share some pictures of those same plants in

Elf orpine (Diamorpha smallii) is a showy plant but it is an annual plant - it grows anew from seed every year.


Another annual plant is Piedmont sandwort (Minuartia uniflora). We found it mixed in with still other annual plants such as bluets (Houstonia sp.), dwarf dandelion (Krigia virginica), and, as shown here, with the Diamorpha. With the thin soil pockets on outcrops, it's not hard to imagine that shallow-rooted annual plants might be very well suited indeed.


The vistas were incredible. It's hard to represent what it looked like - how incredibly talented Mother Nature is when it comes to her own designs.


You might think a granite outcrop presents a harsh environment for plants. We were given a list of plants found on the preserve that was over 20 pages long! There are two pages of lichens alone. Of course only a few of those plants live ON the rock, but there was obviously plenty of places for more deep-rooted ones. 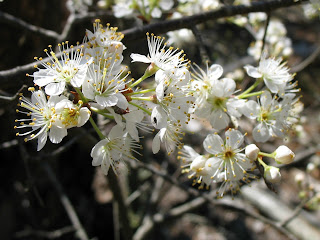 It was fun to find some of the plants we are very familiar with, somehow making it work in pockets of favorable growing conditions here and there. As we finished up our loop trail back to the entrance, we spied this blooming plum (Prunus sp.).


All in all it was a great trip to help us learn about and appreciate one of the many different natural environments in Georgia.


If you’d like to visit Heggie’s Rock, The Nature Conservancy does offer scheduled tours. Please click here to see the scheduled trips.
Posted by Ellen Honeycutt at 8:00 AM 3 comments:

Violets Are Blue Too


Yes, violets are blue but they are also purple and white and even yellow. Scorned by many as a weed, the common lawn violet (Viola sororia) has brightened many a small child’s day with its colorful flowers that are so easy to pick. Approximately 24 different species of Viola are native to Georgia with a great many more natural hybrids and color forms. These little plants flourish in all environments from sun to full shade and from dry prairie to wetlands.

Much of the scorn for violets comes from their ability to reproduce in high numbers. If you have planted pansies (bred from Viola tricolor, a non-native violet), you may be familiar with the seed capsules that form. For the weedier forms, that is not the whole reproductive story. Species like V. sororia, the common violet, also have cleistogamous flowers. Those flowers are located at the base of the plant, they do not have petals and they never open so they are self-pollinated (and they reproduce exact copies of the parent).

Violets are host plants for several butterflies, primarily for species in the Greater Fritillary group, but they are also used by some species in the Lesser Fritillary group (which also feed on passionflower).  I found an interesting tidbit in an article on the North American Butterfly Association page. The article says that eggs on not laid on the plant itself, but rather on nearby debris like dead leaves. In addition, the caterpillar feeds at night and hides in the debris during the day rather than stay on the host plant. Another good reason not to clean up dead leaves!

I have come across more violets than I would have imagined in my plant wanderings – until I took the time to identify them and count them up. I found 3 different species on a trip to The Pocket of Pigeon Mountain one spring: Viola canadensis (Canadian white violet), Viola rostrata (long spur violet, found in both blue and white forms), and Viola tripartita (a yellow violet whose name is meant to describe the variation in leaves).


Around the neighborhood I have seen both common lawn violets: Viola sororia and Viola bicolor (an annual species known as field pansy and a welcome early spring flower).

I have also found in my wooded areas a deep purple Viola rostrata and the silvery-leaved Viola hirsutula (Southern woodland violet).

A white violet that I found in just one area of my yard appears to be known as a natural hybrid: Viola x primulifolia. I have less of it this year perhaps due to crowding by some of the plants I have added to the area. The seeds probably came in with something else.


On plant rescues in my area we often find the yellow Viola hastata (halberd-leaf violet) in the woods. It’s a cheery sight in the shade. Sometimes we have found Viola pedata (birdfoot violet) in sunny areas with poor soil.

In my opinion it is one of the most beautiful ones – large flowers are complimented by very attractive foliage. It thrives on poor soil and some gardeners have killed it with too much love (rich soil). 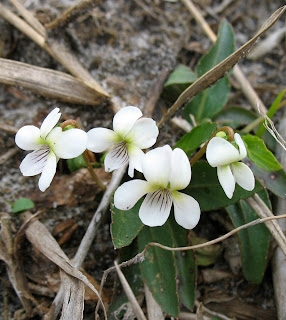 Recently I was on a field trip near Augusta and had a chance to discover a Coastal Plain violet, Viola lanceolata (lance leaved bog violet), in the moist conditions of a Carolina bay. It was happily growing and blooming in both standing water conditions and drier areas nearby.

Quite a variation in color forms exist among the violets, especially the blue ones. I have seen white forms of several of the species noted for being blue; V. bicolor has a large variation on a regular basis probably due to good cross-pollination.

The one variation that seems to get the most attention is a blotched form of the common violet, V. sororia.  Sometimes listed as Viola sororia priceana (a name which does not follow binomial convention) or Viola sororia f. priceana or it is known by the common name “Confederate violet”. It is basically just a color variation that can be fairly widespread once it appears (probably thanks to those cleistogamous flowers).

Ok so that is ten different ones for me – I’ve certainly got quite a few more to find. Next time you see one of the many, many violets, I hope you will think kindly of it and smile.