If it’s spring then we must have had another Spring Pilgrimage weekend with the Georgia Botanical Society. This weekend was the Society’s 50th such event, and despite an awful weather forecast, the event went on as planned in the area around Clayton, GA. This blog is about my Friday field trip, one that I actually led yet still enjoyed and saw some great things.

As the leader for this trip, I felt obligated to preview the path ahead of time and I did that in January. I did a blog on that trip because the waterfalls were so amazingly big with the winter rains. Although I knew what the evergreens plants were, all the others were going to be a surprise for me as well as the participants. We found some really cool things (and didn’t get rained on at all!).


The first 1/3 of the trail is rather plain, with mostly evergreen shrubs and violets. The sweet white violets (Viola blanda) were abundant throughout the trail, their small round leaves and tiny white blooms meeting us at every turn. After a while we saw another round-leaved violet but no blooms on it until much further. With the help of another participant, we figured out it was different than the sweet white and the yellow blooms we finally found confirmed it: Viola rotundifolia. I love how people on BotSoc trips work together to share knowledge.


As the path climbed higher, everything was wetter and we began to see some of the spring goodies: foamflower (Tiarella cordifolia), jack-in-the-pulpit (Arisaema triphyllum), and some of the prettiest yellowroot (Xanthorhiza simplicissima) that any of us had seen before. As we continued to make our way towards the falls, crinkleroot, or toothwort, (Cardamine diphylla) and trilliums joined the floral parade.

We passed through a drier area after a small bridge and found blooming Robin’s plantain (Erigeron pulchellus), star chickweed (Stellaria pubera), and pussytoes (Antennaria sp.). Finally, the path opened up to the falls and a restful area of large rocks for sitting (not that many of us sat, there was too much to see!). We found more crinkleroot, wood anemone (Anemone quinquefolia), and one special plant in abundant bloom: mountain bluets (Houstonia serpyllifolia).

Also very interesting in this area was a foamflower (Tiarella cordifolia) with a long stolon that had rooted itself further away. Apparently this is a well-known trait. We saw another instance of this on our Saturday field trip to another location.

From there we turned around and made our way back to the parking area. I grabbed a few shots of the blooming mountain doghobble (Leucothoe fontanesiana) along the way, and spotted one broken mountain magnolia (Magnolia fraseri) that was leafing out but not blooming. If it hadn’t been knocked down, I wouldn’t have known it was there.

There are still many blooms to come on that trail as it is loaded with Rhododendron and mountain laurel. It should be a beautiful sight in May.

As plants grow, sometimes I have had to deal with increasing tree canopy creating more shade over time. I have written before about having to trim trees, even remove them, to open the landscape back up for healthy growth on the understory. This month I realized that nature had accomplished that for me when I found a single bloom cluster on an azalea in the woods.

Over the last 3-4 years, a number of trees have naturally fallen during storms in the wooded part of my property. I knew this azalea was there; it is natural to the property and grows along the top of the bank overlooking a small creek. I’ve never seen it bloom even though it is clearly mature enough. It was light that it needed.

So while I’m sorry to have lost those trees, the azalea and many other plants will get a chance to grow, bloom, and disperse seeds for a little while until the canopy fills in again. The flowers are open now, revealing that this azalea is a perfectly lovely Piedmont azalea (Rhododendron canescens).

The Eastern Tiger Swallowtail butterfly has been on my mind recently. On April 6th, an individual that I’d overwintered finally eclosed (came of its chrysalis) after 7 months! The life cycle of these insects is really amazing. It is certainly fitting that this large butterfly is the state butterfly of Georgia as it is so abundant during the spring and summer.

The 3 color forms – yellow male, yellow female, and dark female – add a bit of interest to its discovery as we try to figure out (in flight!) which one we’re seeing. This blog of mine shows pictures of all 3 forms and talks about comparing to other dark swallowtails.

Recently someone asked on Facebook about what flowers she could plant to support specifically this butterfly in Georgia, so I started thinking about all the native flowers that I’ve seen them on. The following photos were taken from 2014 to this spring. They seem to be a very adaptable adult when it comes to choosing flowers for nectar. In addition to these, I know that they like ironweed (Vernonia sp.), beebalm (Monarda sp.), and coneflower (Echinacea sp.) as well.


This topic would not be complete without mentioning the native host plants that keep this butterfly flying here in Georgia. This butterfly has evolved to use a number of different plants and the females will lay eggs on the leaves of tuliptree (Liriodendron tulipifera), sweetbay magnolia (Magnolia virginiana), ash (Fraxinus sp.), wild cherry (Prunus sp), basswood (Tilia americana), and a few others. I found my caterpillar on green ash (Fraxinus pennsylvanica). If you’d like to support this butterfly, make sure you have at least one of these plants in your landscape.

I Can't Believe It's Not the Native!

The Southeastern US and several Asian countries (China, Japan, Korea) share a lot of plant relatives and apparently have very similar climate. Many Asian plants do very well here (some of them even do a little too well), and botanists have introduced a lot of them over the years (going way back to the 1700’s).

Some of them have been well-known introductions for many years: Asian azaleas (they are evergreen) and hydrangeas (they have pink and blue blooms) have graced many southern landscapes for years. Some are so intertwined into our natural areas that people don’t even realize they are not native: Japanese honeysuckle (white and yellow flowers) and Chinese/Japanese wisteria (large panicles and fuzzy seed pods) can be found in many ‘wild’ places. 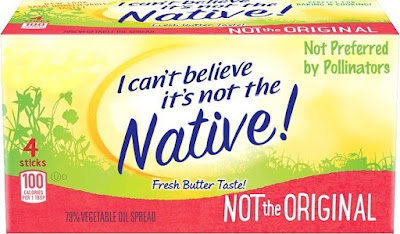 As close as these “cousins” are to our native plants, it’s worth recognizing that they’ve still been separated from ours for long enough that the rest of our local ecosystem doesn’t recognize them well enough. Some estimates put that separation at 135 million years ago! To support the insects and the other critters, it’s still best to choose and use the Georgia natives.

In addition to the azaleas, hydrangeas, honeysuckle, and wisteria are some other plants where non-native cousins have been showing up in the nursery trade. Be careful when you’re shopping so you know what you’re getting, checking not just the common name, but also the genus and species. Use your smartphone to verify on the spot. Recently I saw a plant label for wisteria that had no species name so the buyer would not know what they were getting. Walk away from insufficient information, or let the nursery know that the labeling is inadequate.

Viburnum: Non-native viburnums have also been in nurseries and gardens for years.  Some of them, like the snowball viburnum, are quite showy in the spring. Others, like the linden viburnum, have been used to grow berries for birds. Native viburnums include V. dentatum, V. nudum, V. acerifolium, V. opulus  var. americanum (careful, V. opulus is not native, look for the var. americanum), and many others. Read my earlier blog here about viburnums.

Oak (Quercus): Most of the oaks sold in the nursery trade are native with one notable exception – sawtooth oak (Q. acutissima), which is often used in parking lots and other urban settings. This ragged-leaf oak looks similar to chinkapin oak but the fringed acorn caps on sawtooth are distinctive. We have plenty of native oak species to choose from and many of them grow just as quickly or equally well in urban environments.

Euonymus: The non-native burning bush is gaining favor in designed landscapes and is on track to become a real pest in Georgia (the lag time on plant-introduction-to-invasive-plant can be 20-50 years). I see quite a bit of it popping up into natural areas near me. Georgia has two species of native Euonymus but you really don’t find them in nurseries much so anything you find is probably the non-native. In Georgia, Euonymus americanus is the more commonly found of the two.

Beautyberry (Callicarpa): The native has the name to match: Callicarpa americana. It also has bigger leaves. Another difference is the position of the flowers and fruit relative to the stem. The native species are closely held to the stem while the Japanese ones have a little bit of length holding them aloft. The difference is noticeable if you see them together so compare some pictures on the internet. Unfortunately, the non-native ones are sold a lot and not always well-labeled.

Fringetree (Chionanthus): Look for the one with an American state in the name, Chionanthus virginicus. The non-native one is popping up in nurseries more often as well and is promoted as ‘showier.’ Both have white fringe flowers and the females bear the blue drupes that remind you they are in the olive family.

Redbud (Cercis): Another easy one to choose if you look for the North American name, Cercis canadensis. Although the native species has gained popularity thanks to cultivars (e.g., ‘Forest Pansy’ and ‘Rising Sun’), the Asian ones now have cultivars as well with bigger, more deeply purple flowers and glossy leaves.

Dogwood (Cornus): Flowering dogwood (Cornus florida) has a competitor called kousa dogwood which has similar large, white bracts. It blooms a little later than the native and the fruits are large and not edible by small birds (which is a key feature of the native species).

The next time you’re looking for a landscape plant, make sure you know what you’re getting. Some of these have very subtle differences to humans but which are chemically significant to insects. You might find yourself saying “I can’t believe it’s not the native one,” but they’ll know.

Thanks to my very creative husband for the graphic.

Posted by Ellen Honeycutt at 8:00 AM No comments: