When you have a cat, you usually know if he/she is a chewer. This one is a chewer. So we can add “bad mama” to the title because I should have known better. I would not ordinarily write a post about this situation, but I want the information to be out there.


Florida anise (Illicium floridanum) is a coastal plant that grows very well even in non-coastal areas of the southeastern US. It is native from the panhandle area of Florida to southern Alabama, Mississippi and Louisiana. It naturally grows in moist shady areas and has become a popular landscape plant for those conditions.

It is a broadleaved evergreen shrub with thick glossy leaves, red or white flowers and star shaped seed pods. The leaves are 2-6 inches long, 1 inch wide and smell of anise when crushed or torn. The twigs also have the same scent.

That’s the plant, now let’s hear about the cat. Salem the cat is a chewer. We don’t have houseplants, and we don’t have cut flowers. Any bowls of leftover vegetable matter (such as kitchen waste destined for the compost pile) are subject to midnight nibbles with discarded bits flung down to the floor.

Several days before the cat and the plant got together, the plant got broken in the yard and I decided that perhaps I could root it. I made a fresh cut on the stem, trimmed the lower leaves and stuck it in a pot in the garage. The section was about 3 inches long and all new growth.  I decided to let the cat explore the garage … I had done it before and always remembered to remove any plants first. I forgot.

Cat came back in about an hour later, ate a snack and then threw up. Not a big deal for cat owners. I went to bed. Later, he pooped diarrhea all over the bathroom floor and my husband cleaned it up. Around 4 am, I woke up to a ruckus. I found him in the living room, legs in every direction and a wild look on his face. Major symptom: he could not control his limbs.

As we headed to the car, I spied the plant: chewed and pulled out of the dirt. Upon arriving at the emergency vet, I told them that it appeared he’d eaten this plant (and by now my husband had used his phone to find out that it is toxic). Other than information that it is toxic, there was little information on how to treat or how the patient turned out or ingestion in felines or animals. One study about infants in China indicated that the patients recovered once the ingestion stopped. 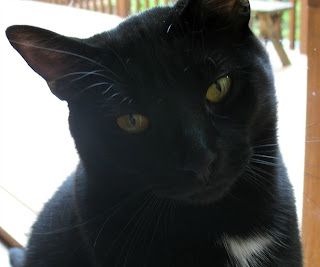 End result is that the cat is fine. They treated him with fluids, activated charcoal and a Diazepam injection, and he was released about 30 hours after we took him in. At about 14 hours post-ingestion he still had some mobility issues and had thrown up once more. Blood work showed nothing unusual except an elevated white count. Without knowing that the plant had been ingested, the likely recommendation would have been expensive tests to search for the source of neurological issues.

I don’t think he ingested a lot based on observation of the chewed plant but clearly the toxin is strong. So if your cat, dog, child or anything has ingested, eaten, chewed, swallowed, nibbled or made tea or a drink out of any part of this plant (leaves, flowers, seeds) and you are seeing some reaction such as vomiting, diarrhea or loss of motor control … please take them to a vet or doctor immediately for the best chance of recovery.

We pulled through ok and I hope that this information helps someone in the future. By the way, blood work a week later still showed elevated white count so we are assuming that is unrelated to the plant issue.
Posted by Ellen Honeycutt at 8:00 AM