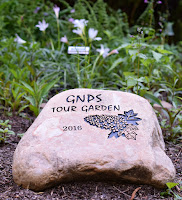 After a one year hiatus of the Garden Tour program, we just completed the 2016 GNPS members-only garden tour. I participated (as a garden) in 2008 and decided to participate again this year, 8 years later. The garden has changed in several ways so it seemed a good time to repeat (and it was time to get the place back in shape).

There’s a lot of work involved in getting your garden ready for a tour. I started out in February with general clean-up such as large fallen limb removal. I hadn’t really done much of that over the last few years so my bird-friendly brush piles were diminished and the limbs were everywhere. Now I have four big brush piles again and the forest floor appearance is more focused on the growing plants than the dead limbs. Note: I didn’t cut back my perennial stems until mid-March, leaving them for the insects to finish out their winter cycle.

As plants began to green up and bloom, I evaluated where some editing was needed. I was generally happy with the bones of the garden, but some plants had gotten a bit too happy (blue mistflower anyone (Conoclinium coelestinum)? Available for the taking!) while other plants had disappeared. Some plants were potted up for the GNPS sale and some moved to other locations (and some mistflower just had to go).


The plants that I’d had waiting in the wings (well, in pots) now could be planted. That was really fun! Probably adding plants is the most enjoyable part of gardening. I also used some wood chips from my January tree work to better define the paths so that people had clear places to walk.

Adequate deer protection was another part of my prep work. Deer pressure has been a major reason behind some of the garden’s decline (especially in the back) since the first tour. The local herd had really grown since 2008, thanks to feeding by a few neighbors. I’ve learned which plants to place only in the front (hydrangea) and which ones to spray more often. In the month before the tour, I sprayed a lot but still some plants were eaten.


I have spent more time in the garden this year in preparation than I have in several years. That’s been a good thing! I’ve been able to really notice more plants as they grew, as I weeded around them or nestled them in fresh mulch. I’ve seen blooms that I might not have noticed before. So I'm glad I did it.

Just a few pictures from today. Will have to do a follow-up blog to show more (the software balks if there are too many pictures). Enjoy the tour.


In next week's blog, I'll feature some of the plants that were blooming during the tour. I've got to share what finished out the day in a most beautiful way.

After everyone had left, I walked up the driveway and spotted this butterfly. The previous day I had found the chrysalis on a dead branch that was broken but still attached to the tree. I flagged it to keep anyone from removing it. The butterfly had just emerged at the end of the tour. What an awesome end to a day that I hope inspired people to support insects just like this one.
Posted by Ellen Honeycutt at 8:00 AM 3 comments:

I Am A Plant Relocator

It is never more apparent to me than the week before the native plant society’s annual spring sale that I am a semi-professional “plant relocator.”  I should get a bumper-sticker made or perhaps a button to wear on my shirt. Of course, I should get several for I am not the only one; I have a group of friends that have trained with me all these years.

How do I get all these plants?

- All through the year, I rescue plants and pot them up or plant them in my yard. The potted plants are often destined for the next plant sale.
- Someone might offer to donate plants to the sale, and I’ll host the plants at my house for several months (even longer if they need time to grow to a good size).
- I pot up extras from my own yard.
- For the native plant society's annual sale, nurseries donate plants.


So those are all plants coming in. Then, at some point, plants go out. They get packed up and taken to the big sale or to meetings, plant swaps, restoration projects or friends.  For the big sale, the car gets pretty dirty by April. In the two weeks before the sale, the back seats are removed or folded down to make more room. Tarps or old shower curtains provide some measure of protection, but pine needles and bits of mulch know how to escape.

I really enjoy being able to facilitate the transfer of native plants to new people. We all do. The reward is in the look on the faces of the recipients and customers. To hear someone say “Oh, I’ve been looking for this!” It is also in knowing that you’ve shared one of your favorite plants with someone who will enjoy it.

This year added a special aspect to the game. I’m participating in the society’s garden tour next weekend so there was much movement around the house as I shuffled plants that were going or staying but needed to be somewhere else (front to back, back to upper deck, or was it the side deck …?). More about that fun in next week’s blog ….

So here’s to me and my friends: Sheri, Marcia, Karen, Lynn, Greta, Lola, Debbie. You know who you are. Maybe we should write a re-locator manual! In the meantime, we’ll keep honing our skills so that we can train future plant re-locators in the ways of this craft.
Posted by Ellen Honeycutt at 8:08 AM 1 comment:

After All These Years

After almost 13 years of being on this 2-acre property, I thought I’d seen every plant that came with the property. I have walked every inch of it over the years, searching for good plants to appreciate as well as looking for bad ones to remove. This week, I found something that I’d never seen before: Southern adder’s tongue fern (Ophioglossum vulgatum).

I had heard of this plant before - a friend has it - and so had an inkling of what it was when I came upon it on a high humped area in a ditch that occasionally gets flooded during heavy rains.  Adder’s tongue fern produces individual leaves (a frond, really) and sometimes a separate spore stalk (one per frond). Not all fronds have the spore stalk. I actually found a colony of fronds and probably less than 25% of them had spore stalks (known as a fertile frond).

Georgia actually has several species of adder’s tongue fern throughout the state, but this one is found only above the Fall Line.  According to the Field Guide to the Ferns and Other Pteridophytes of Georgia, Ophioglossum vulgatum is found in floodplains along streams and other areas. That explains why it likes this spot!

Later I also found a smaller colony about 50 feet away in a drier area of the woods.  Again, only a few of them had fertile fronds. So why am I just finding this plant? I don’t think I could have brought it in with other plant material because I don’t plant many things into the woods, and I never would have planted them in the middle of a drainage ditch (or even near it).


One source that I found said that the plant can go for years without producing a frond. I suppose that might be the answer. We’ve had a couple of wet years. Perhaps the plant decided that conditions were right for an appearance.

Well, I’m glad to have found it. Now I wonder what other things might pop up?
Posted by Ellen Honeycutt at 7:30 AM 3 comments:

Plants are often part of larger groups, known as families. It’s fun to see which plants are in the same family and this spring I am reminded that there are plenty of spring bloomers in the Rosaceae family (besides roses, that is).


How do you know which ones are in the same family? You can use the USDA Plants Database to see family relationships. In particular, these are the ones catching our attention at the moment.

The Rose family consists of trees, shrubs and even herbaceous perennials.  Perennials like goats-beard (Aruncus), just putting up foliage now, plus strawberries (Fragaria), bowman’s root (Gillenia), Geum and others. Some of the later blooming family members include roses (Rosa), the native Spiraea, blackberries (Rubus) ninebark (Physocarpus) and mountain ash (Sorbus).

Across so many different plant types, it’s hard to believe that these plants have something in common. Not even the type of fruit is consistent as some have fleshy fruits while others don’t. I found several explanations for what ties them together, and it has to do with the flower structure. The following statement is from the Utah State Herbarium website:

Flowers of the Rosaceae are marked by the presence of a hypanthium. This is easiest to see and understand in large flowers, such as those of Malus, but it occurs in all members of the family. The other distinguishing characteristics of the family are its radially symmetric flowers with 5 separate petals, many stamens (i.e., more than twice as many as the petals), and the presence of stipules.

Knowing family characteristics can make your plant identification skills a little sharper. Or it's just fun to be able to tie some plants together. You can read about a couple of other plant families that I have casually explored in earlier posts: Pass the Mustard (Brassicaceae), and More Peas, Please! (Fabaceae).
Posted by Ellen Honeycutt at 9:36 AM No comments: