I take a lot of pictures throughout the year and not all of them make it into a blog post. At the end of the calendar year, it’s a good time to reflect on the beauty of nature as well as share some of the extra pictures. I believe that each day is an opportunity to find and appreciate something beautiful in the native plants and creatures of Georgia. 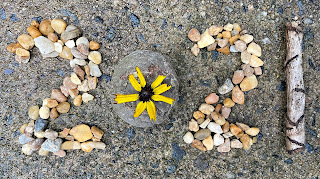 Georgia’s winter weather can be mild at times so spotting an early flower like this annual Houstonia pusilla might be unusual but not impossible. It is, of course, always welcome to get an early flower. Then February came along with some really cold days such that the tub of water that I was accidentally keeping had an inch of ice on it! My grandson enjoyed busting it up.

March is a good flower month for us; this is my neighbor’s arbor of Carolina jessamine (Gelsemium sempervirens) looking pretty awesome. In April, one of our resident pileated woodpeckers enjoyed looking for bugs in fallen logs on our property.


I was thrilled in May to find that my pipevine (Aristolochia tomentosa) was blooming for the first time on my fence. The plant has been there for about 4 years if you’re wondering how long it takes to bloom. The butterflies laid eggs on it 2 or 3 times and we successfully raised a bunch of them, a number of which are overwintering in chrysalis.

Speaking of butterflies, this Question Mark butterfly showed up in June and I loved the way the sunlight made it glow. This one can overwinter as an adult, but I think this one was probably a fresh one; we have plenty of its host plants in the area: elm, hackberry, and nettles.

This tiny frog showed up in July and it is one that I’ve never seen before in my area: a spring peeper. I’ll add that to my growing list of identified amphibians that I’ve found here. I’ve found plenty of reptiles too! A young Carolina anole was shedding its skin in August as it hopped through the dense vegetation of summer looking for tiny bugs.
This Jamesianthus alabamensis finally bloomed in September. Its common name is Alabama warbonnet and I found it at Plant Life Nursery in Rome. They were growing it from seed that they’d gotten from a customer. Some of our small nurseries really do grow some unique things. You can search this blog for some of my small nursery profiles.

In mid-October I released the last of about 8 monarch butterflies that I raised. A friend nearby had gotten some caterpillars on her plants and she shared some with me. It was an unusual late summer season in the Atlanta metro area for monarchs, with many folks reporting them later than usual as they passed through Georgia. This one paused before flight on a Eastern silver aster (Symphyotrichum concolor).

This Gentianella quinquefolia is a bit past peak flowering, but it was a new find for me so I get to celebrate finding in November on a hike in North Georgia. I’ll have to go back earlier next year to see it again.

I end the year with a mystery which has me looking forward to 2022. This pretty aster was still blooming in mid-December in north Fulton County. I posted photos of it to the Southeastern Flora group on Facebook. Based on feedback there and my own research, it might be Curtis’s aster (Symphyotrichum retroflexum). I’m going to try and collect seeds and see if we can better figure this out.

Wishing you a good year in 2022 and more native plants and critters in your daily life.

Posted by Ellen Honeycutt at 11:37 AM No comments: 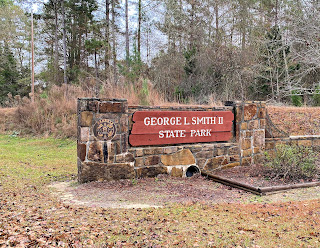 On our way back from Florida this past week, I convinced my husband to depart from I-16 to visit George L. Smith State Park in Emanuel County. This 1634-acre park has a 412-acre lake that was the mill pond for the historic Parrish Mill. It includes a few walking trails and you might even find a gopher tortoise (Georgia’s state reptile) or see a indigo snake. Much of the draw for this state park is the lake where folks enjoy paddling and fishing.

We did not come prepared to paddle, so we walked around the lake shores a bit, admiring the blackwater and the beauty of the trees reflected in it: pond cypress (Taxodium ascendens), bald cypress (Taxodium distichum), and swamp tupelo (Nyssa biflora). We saw several kinds of native fruits: ogeechee lime fruits (Nyssa ogeche) were floating in the water near the mill while a swamp tupelo (Nyssa biflora) was heavy with fruit.

Evergreen plants provided good botanical interest: sweetbay magnolia (Magnolia virginiana), Carolina cherry laurel (Prunus caroliniana), and wax myrtle (Morella spp.) were in several areas. According to a botanical inventory shared with me by Bobby Hattaway, there are actually 3 species of wax myrtle in the park: cerifera, caroliniensis, and pumila.

We also saw plenty of tardily deciduous plants showing a bit of color: swamp titi (Cyrilla racemiflora) and sparkleberry (Vaccinium arboreum) both had a nice mix of colorful leaves, while horse sugar (Symplocos tinctoria) had the occasional purple leaf and water oak (Quercus nigra) was a mix of green, yellow, and brown.

I look forward to coming back during spring or summer to see more plants, especially when they are in flower.

A Moment in Nature for December

I started this monthly #amomentinnature feature in January of this year and I have enjoyed doing it. Taking the time to recognize small moments for their fleeting beauty or uniqueness is a habit worth cultivating. The moment in January featured morning light so it seems fitting that the last month of the year appreciates afternoon light. 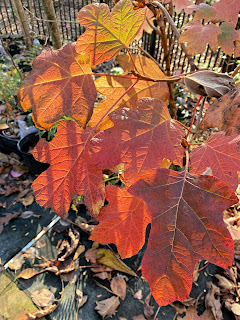 As the afternoon sun angled down towards the horizon, the reddish leaves of oakleaf hydrangea (Hydrangea quercifolia) were absolutely aglow this week.
I often say that if you plant this shrub just for its fall color, you'll get your satisfaction out of it. The rest of the seasons are just a bonus.
So get out there and find your moments. And share them with others. We all need  #amomentinnature from time to time.
Posted by Ellen Honeycutt at 7:30 AM No comments: 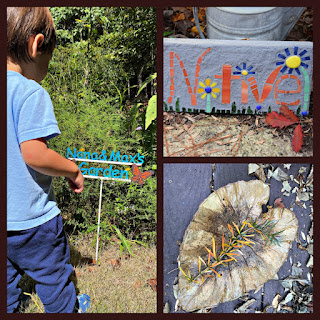 There’s no getting around it, it’s the gift-giving season. Each year it seems to get a bit more challenging as we get older and everyone has enough candles and tchotchkes (but never enough fudge). Toss in concepts like buy more made-in-America products, support small businesses, and go easy on the environment and what’s a girl to do?!
Well, I do have some ideas for the gardener or nature enthusiast on your list. [At right are some of the gifts my friends have given me.]

Plants are always popular with gardeners and divisions from your garden make memorable gifts. Pair it with a durable plant tag complete with Latin and common names and on the reverse put your name and the date. Buy a set of metal labels, use one, and give them the extras too.

Garden signs (like the one above) make nice gifts, can be very personal, and never die for lack of water. Find dozens of hand-crafted ideas on places like Etsy or get inspired to make your own. You can even find signs that illustrate your friend’s garden is pesticide free.

Gift memberships to organizations such as the Georgia Native Plant Society, the Georgia Botanical Society, Georgia Audubon, The Xerces Society, The Nature Conservancy, Georgia State Parks Annual Pass, and many others help your friend get more involved. Most of these groups have tangible benefits such as monthly, quarterly, and annual publications in addition to supporting their mission. Get them a t-shirt to wrap up with your gift announcement.

Those same organizations accept donations in honor of your recipient. Other organizations that you might consider include Georgia DNR (tell them it is for the non-game division to support plant conservation), the Trust for Public Land, the Georgia Piedmont Land Trust, Southern Conservation Trust, the Georgia Conservancy, Chattahoochee Riverkeeper, and many more local groups. Get them a tote bag or coffee mug to commemorate the gift.

Some of those same organizations also have online stores to purchase gifts. You can also purchase gifts and memberships to local nature centers and museums. The Caterpillar Lab is one of my favorite places for not just beautiful and unique gifts but ones which are also supportive of their mission.

Books still make fantastic gifts and there are some great nature-focused ones out there. For the beginner native plant enthusiast, one of Doug Tallamy’s books would be inspiring. The more experienced gardener might appreciate learning more about identifying pollinators, or give a child a book that celebrates native plants. My most recent read was Saving the Wild South.

Of course money is always good and gift certificates for small nurseries (pick the Georgia nurseries labeled ‘primarily native’ at this site) will illustrate that you took the time to find a great place to get lovingly grown and local plants (really appreciated by nature lovers!). Wrap up your gift with brown craft paper and decorate it with leaves, pine cones, drawings, or other natural materials tied up with fabric ribbon or twine.

Gifts of time are especially appreciated by older folks who need help in the garden or just appreciate your company. Create your own gift certificate with messages like “Will plant your new plants for you or Weed your garden” and package it up with a few tea sachets and a message that you can enjoy a cup of tea together after the work is done.

I hope that some of these ideas work for you. If you have other, nature-related ideas, please share them in the comments!