Seventy percent, that is, and actually more would be better. If you know this blog, you already know that I’m talking about native plants. People often ask how many native plants or what percentage should they have. A study by Doug Tallamy and his team* found that at least 70% was required and that even higher numbers are needed to keep bird populations from declining. 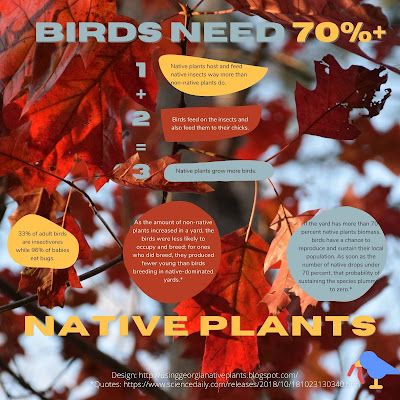 The following quote is from the linked article: “As the amount of non-native plants increased in a yard, the birds were less likely to occupy and breed; for ones who did breed, they produced fewer young than birds breeding in native-dominated yards.”

If you’d like to have birds in your yard, or if you’d like to support birds in general, having keystone native plants and a diversity of them is important. Here is a list of keystone plants; you may already have some.

Don’t feel like this is an unreachable number or a huge task. If you have native oak and maple trees in your yard, they are likely contributing in a big way to your total biomass. The number one opportunity for improvement is usually reducing the lawn. My early January post gave some ideas for working through this bit by bit.

This quote from the Science Daily article that I linked in the first paragraph is particularly insightful:

"The important lesson is that use of non-native plants in landscaping has a 'trickle-up' effect," said Doug Levey, a biological sciences program director at NSF. "Those attractive, non-native plants just provide less food at the base of the food chain and thus support fewer birds than native plants."

Georgia Arbor Day comes the third Friday in February because it’s a good time for Georgians to plant trees. If you didn’t plant a tree this week, however, you still have some time. I would say that good conditions for tree planting in Georgia - cool and moist conditions - continue into March.

When it comes to choosing plants for your yard, especially plants that make a positive impact on your local ecosystem, a native tree offers a lot of benefits over a non-native one. Research has shown that woody plants like oaks and maples support more insects in their life cycle than perennials.

Let’s consider two choices: a native serviceberry (Amelanchier) vs. a non-native crape myrtle (Lagerstroemia). According to data compiled by Doug Tallamy and his team, serviceberry can support 119 species of butterfies/moths while crape myrtle supports just 3. If you had a small yard and wanted to help grow more butterflies/moths then which would you plant? If you wanted to support birds, the serviceberry wins in two ways: it has tasty fruit that birds adore and it grows caterpillars for them to eat too.

I’ve written about Arbor Day quite a few times over the years. As a tree lover, it’s a topic that never gets old. When my kids were in elementary school, I enjoyed helping the students there celebrate. In my post from 2012, I shared some of those experiences. In my post from 2013, I encouraged people to plant for the future and shared Joyce Kilmer’s lovely tree poem.

In my post from 2015, I expanded on why using a native tree over a non-native tree provided more benefit to the local ecosystem. My post from 2018 provided a list of my tree profiles over the years to help people learn more about some specific trees. It was truly a celebration of trees.

If you’ve already got enough native trees, plop a chair under them and start dreaming about your perennial garden (because, yes, we need perennials too!).

Winter months are not just a time to bemoan the lack of green leaves. I like to use the time to appreciate some of the other aspects of plants: the branching structure, the distinctive appearance of leaf buds, the dried stems and seeds of herbaceous perennials.

For this month's #amomentinnature, I stopped to take a photo of a large oak tree in the back corner of an old cemetery. 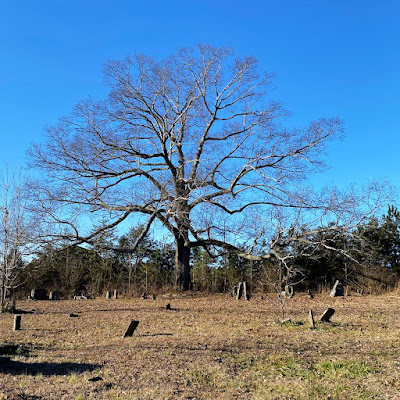 In a time where old trees aren't saved as often as they should be, I am grateful to places like old cemeteries where they can rest in peace.

All Words Lead to Native 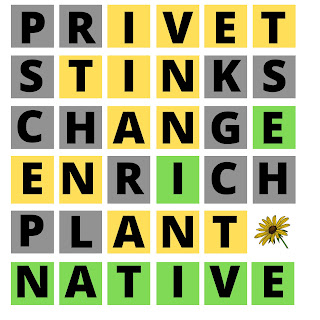 In a nod to the game Wordle, played by me and many of my friends, I offer this silly take on it: all words lead to “native” plants. I did have to increase my version to 6 tiles per word so that it could accommodate the word native, and I had to use a flower for one letter so clearly this is way off from the original!

This is probably true for many folks with a passion – words about my hobby play a big part in my everyday life, to the point where I start to see them everywhere.

Speaking of words and plants, I just finished reading The Brother Gardeners by Andrea Wulf. It is a fascinating account of a group of men in the 18th century who shaped important concepts about plants (Carl Linnaeus was standardizing botanical names during this time, much to the dismay of those who came before him), increased the availability of them (John Bartram was sending plants from America), and wrote publications that helped make plants (and botany) more accessible to the middle class. 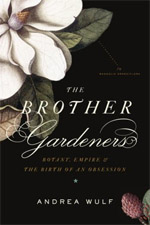 In the 1730’s, English merchants such as Peter Collinson were receiving boxes of seeds and plants from America. The book opens with a description of such a box in 1734 that contained “hundreds of seeds neatly wrapped in paper, a few living plants and, most extraordinary of all, two flourishing kalmia cuttings." From these boxes, shipped across the ocean on merchant ships and subject to many hazards, came the beginnings of what would become vast estate plantings of American plants: white pine, tulip poplar, Carolina allspice, rhododendrons, mountain laurel (Kalmia), Eastern redcedar, Atlantic whitecedar, red maple, sweetgum, and much more.

Inspired by drawings from Mark Catesby’s expeditions to Virginia and Carolina, Englishmen were willing to pay dearly to get these plants. Collinson (for whom the genus Collinsonia was later named) was especially fond of lady’s slipper orchids. This love affair with American plants continued for several decades. Around 1760, the Duke of Richmond’s Goodwood estate was described as having “400 different American species, all planted as wilderness. Some of the tulip poplars were higher than 40 feet and a Magnolia grandiflora was thirty feet.” Such a garden was quite the showplace, and the English enjoyed the fall foliage of American plants as much as they enjoyed the flowers and conifers.

[Likewise, American colonists were happy to received European seeds and plants in return. John Bartram enjoyed showing off the plants he received in return.]

Eventually, English ships went to other places and brought back plants from Africa, Australia, and warmer climates. Unlike the American plants, most of these went into hothouses, except for perennials such as Pelargonium (common name is geranium) which is still a poplar garden flower today there.

It was a very enjoyable read. The history on the standardization of names was fascinating; the English were mostly against the proposed changes by Linnaeus. His two publications, Systema Naturae (1735) for classification and Species Plantarum (1753) for botanical names, were not well-received but stood the test of time. Plant names were sometimes used to honor people (Kalmia for Pehr Kalm, a student of Linnaeus) while one particular fellow that was not well-liked had a stinky weed plant named for him.

It’s incredible to think that Magnolia grandiflora was once called Magnolia foliis lanceolatis persistentibus, caule erecto arboreo by one person while another called it Magnolia altissima, flore ingenti candido. Common names included “Greater Magnolia” and “Larger Laurel leave’d Tulip Tree.” According to the author, names grew longer as new but similar species were discovered and “some names ran to half a page.” Thank goodness for the binomial system!