Flowers have been opening for 3 months now in Georgia. From the early trout lilies to the flowers of big shrubs like oakleaf hydrangea, there is something to see every day in Georgia’s native floral show. A round of plants opened up recently that just grabbed my attention: Stop and appreciate us!

So this month’s #amomentinnature is not a single item but a collection of beautiful flowers that are native to Georgia. Flowers that live in my garden and could be in many other Georgia landscapes. 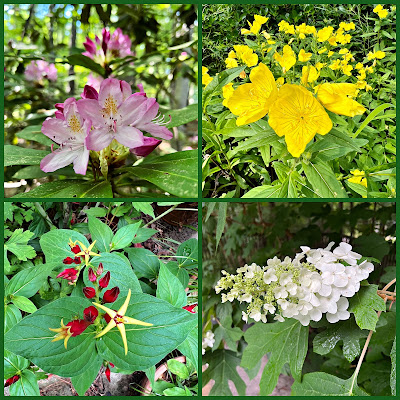 Rhododendron catawbiense (top left) hybrids were having their best year ever with dozens and dozens of blooms.

Sundrops (Oenothera fruticosa) fill the front bed with sunshine (even after I donated 15 of them to a local plant sale!). Upper right.

Indian pink (Spigelia marilandica) is always one of my most anticipated blooms and surprisingly easy to grow. It is so incredibly beautiful. Lower left.

Oakleaf hydrangea (Hydrangea quercifolia) is one of our most well-known Georgia native shrubs and beautiful in all seasons. Lower right.

Get out there and appreciate what's happening and add more to it!

A new weed from South America is showing up in southern lawns and, unfortunately, I am the first person that I know of that has it! I first read about this on a Facebook post by the Alabama Extension Invasive Plant Page on May 12. On May 15, I found it in my lawn. The name of it is skyseed (Chevreulia acuminata). It was first found in the US in 2012 in Alabama but not identified until 2019.

This is a very short, small plant that spreads on thin, wiry stems. In last week’s blog, I talked about leaving turfgrass long enough to shade out weeds and keep the soil cool. Unfortunately, that approach doesn’t stop creeping, perennial plants like this from spreading. The thin, white flowering stems can produce flowers when only a few inches tall, allowing it to hide in the grass.

The flower on this plant appears on a white stem and looks like a seedhead from the moment it opens. Once the flower goes to seed (seemingly in just a few hours!), the seeds are easily detached, making this a tricky one to remove. I know I didn’t get them all.

I opted for manual removal, but I’m sure that some stems probably didn’t pull up completely. Over the course of this week, I discovered and pulled new ones every day from an area that is about 3x3 feet. How did it get here? This area of lawn is not near the street; rather it is a small semi-circle of grass near the front door.

Be on the lookout for this sneaky new weed. The puffy flowers/seedheads will probably be the first you see of it. On Facebook, another person reported finding it in Coweta County, a fair distance from my lawn in Cherokee County. She had a good idea for gathering it up: she used her portable vacuum cleaner to get the seedheads!

Note: the fluffy seedheads look similar to the annual trampweed (Facelis retusa) but that is a different weedy, non-native plant.

Why No Mow May is not the Answer

It’s not the answer for Georgia, that is. What was the question? According to a history of the movement, not mowing your lawn in May is a way to benefit early pollinators by preserving early flowers that might be in the spring lawn. The movement started first in the UK (where flowers in lawn are not uncommon) and was adopted in 2020 by residents of Appleton, WI.

While the phrase is very cute and memorable, it is a better consideration for APRIL in Georgia landscapes. By May, most of the early lawn flowers (dandelions, violets, bluets) are done and turfgrass is growing quickly. We would be hard-pressed to convince most neighbors to stop mowing during such active growth. And if you were doing it for the dandelions, please read this to understand why non-native dandelions are not the benefit you might think.

I’d much rather convince people to consider the following (with suggested catchy phrases if you need them):

I have found that with the rise of mow and blow services, lawns are mowed more frequently than they need to be (and I see lawns mowed when they are wet or don’t even need it – consequences of scheduled mowing services unfortunately). Contracts with lawn services mean that these companies mow on their schedule, charging people to mow 1-2 times per week when often a 3-week schedule would work, especially during dry times.  Irrigation and weed/feed treatments also keep lawns growing faster than they need to (more mowing!).

Don’t let companies that profit from your decisions convince you to apply more chemicals and mow more often than your lawn needs. My lawn was laid from sod in 2004 and almost twenty years later (without fertilizer or irrigation) looks quite good. I leave some extra plants (violets, fleabane, dwarf cinquefoil, and even a few ferns have moved into the more shaded areas) and I hand weed the occasional non-native weeds.

I kept track of my mowing schedule last year for my zoysia lawn. Letting the grass grow a little longer (e.g., 3 inches instead of 2) helps to keep the soil cool, more moist, and suppress weed seeds from germinating. I mowed every 3 or 4 weeks depending on conditions and need. And this year, we switched from gas to a battery mower, another change to consider.

Rethink your lawn not just in May but in every month.

The Rise of the Ragworts

The common plant name ‘ragwort’ is probably way too similar to the word ragweed for comfort, but the ragworts are completely different plants – and quite worthy of the garden. The word ‘wort’ is an old English term for plant and ‘rag’ refers to the ragged edges of the leaves, thereby denoting that this is a plant with ragged edges.

The species in Georgia were previously in the genus Senecio but are now considered to be Packera.  Several of them have the common name golden ragwort or golden groundsel. The name ragwort was first applied to Senecio jacobaea (now Jacobaea vulgaris), a similar-looking plant native to Eurasia. It is not unusual for our native plants to pick up common names from Old World plants because that is what early explorers knew.

The seven species in Georgia are mostly perennial. The species known as butterweed (Packera glabella) is an early-blooming annual/biennial of moist floodplains where it can create dense populations in early spring. However it is not limited to wild areas; it has found my front lawn (which is moist) and spread happily there too. I leave it for the small bees and early flower flies and then try to deadhead as much as I can. Its thick but hollow stems make great spyglasses for toddlers too!

Another early blooming species is woolly ragwort (Packera tomentosa). I first saw this one in the granite outcrop communities on Arabia Mountain. The pale, woolly leaves are thick and distinctive.

A mid-spring species is golden ragwort (Packera aurea). I have it in abundance now but originally started with only 3 plants from a friend. It is evergreen and blooms in shade; it is also deer resistant so I have happily moved it to shady spots and given it away to friends and plant sales. Every spring it makes beautiful sweeps of yellow flowers in April.

The late spring species gracing roadsides now is Small’s ragwort (Packera anonyma). I love the way it seems to come out of nowhere, spreading sunshine in large sweeps of color. It grows happily in drier conditions than the equally prolific butterweed. Bloom time and location are two key ways to distinguish the two without leaving your car.

I have not encountered the other 3 species in Georgia, but the one called roundleaf groundsel (Packera obovata) has similar foliage to P. aurea but is more sun tolerant. The final two species are limited in range in Georgia; the first one is Blue Ridge ragwort (Packera millefolium). It has highly dissected foliage and is found only in Rabun County on high elevation rock outcrops. The second is balsam ragwort (Packera paupercula); it is found in moist prairies in Floyd County and has foliage similar to P. anonyma. My friends Richard and Teresa Ware of Floyd County also have photos of P. crawfordii, a species of bog areas, that might be in NW Georgia.

I hope you’ll learn to appreciate ragwort and perhaps even introduce a species or two to your garden. It’s hard to beat for dependable spring blooms.

Things sometimes just appear in your garden. Did they come in on the wind? Perhaps they hitchhiked in via another plant? Two-flower melicgrass (Melica mutica) showed up several years ago. A tall, open grass, it was attractive and I let it be. I didn’t know the name of it at the time.

This year I noticed that it was in a few more of the beds, still light and airy. Through a friend I got it identified (yes, I reach out to people who I know are more knowledgeable just like many of my friends ask me for help). I have a number of other unknown grasses that pop up, some of them clearly annuals, others return each year. After I retire, I plan to research some of the others.

This two-flower melicgrass was just too interesting to wait any longer for an id.