Pollinators in Georgia: A Compilation of Articles

Support for pollinators (bees, butterflies, moths, wasps, flies, beetles, hummingbirds!) is higher than it’s ever been. Those of us who write in support of these critters (including the fabulous Heather Holm, check out her pollinator books on her Pollination Press website) are thrilled that more people want to help them at home, in our communities, and in our wild spaces. I have a lot of blog entries about pollinators, but I know it can be hard to find things. This blog post is a compilation of what I think are some of my best blogs to learn about pollinators and about how to support them in Georgia. 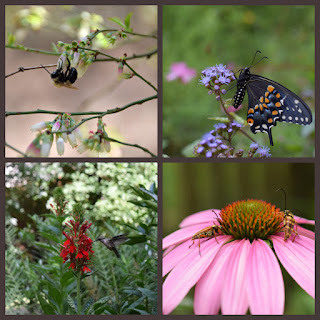 In Your Georgia Garden -general topics about helping your garden be a place of support for pollinators as well as topics on 3 specific butterflies in Georgia: Monarchs, Eastern Tiger Swallowtail, and the Pipevine Swallowtail.

Why Native Plants Matter for Butterflies and Bees

Native Plants for Butterflies and Pollinators (includes printable lists, same as above)

Native Plants are the Real Thing for Pollinators

Supporting Birds - topics specific to supporting birds in your garden through the use of native plants.

Why Native Plants Matter for Birds

Books/Resources - a few of the books I've reviewed about pollinators.

Woodrushes: A Different Kind of Rush

When I first keyed out a streamside woodrush in my yard some years ago, I was surprised to realize how different it was in appearance to the rushes I’ve seen in wet areas or even in standing water. Woodrush (Luzula spp.) looks more grass-like than those aquatic rushes (Juncus spp.) and the flowers are arranged differently.

Recently I shared a photo of a pretty woodrush with a friend. After our discussion about it, I realized that I might actually have several different species because some grow in different areas and are noticeably taller than others.

In an earlier blog that I did about sedges (Carex spp.), I mentioned the rhyme for grasses, sedges, and rushes. Apparently these still follow the “rushes are round” when it comes to the stem and don't have the nodes/joints that distinguish true grasses.

The plants are flowering now and I have them in 3 places: they are abundant in the front lawn near the street; there is a single plant in the woods behind the house; and the largest area of woods is well-populated with a small form that loves to grow in moss.

Since one plant has single flowers, it was easy to key that one out to hairy woodrush (Luzula acuminata) because it is the only species that does. Given my location, it is likely L. acuminata ssp. carolinae. That was the lone plant behind the house. From there, the remaining plants have multiple flowers and the identification points were a bit more subjective (is the inflorescence divergent, even widely spreading, or simply erect)?

Clearly the last two have different growing habits and even the flowers seem slightly different when viewed with a hand lens. I take little pleasure in knowing that others have struggled to distinguish common woodrush (L. multiflora) from hedgehog woodrush (L. echinata) and sometimes they have been lumped together. In the end I have decided that the ones in the lawn are species L. echinata because of the more spreading inflorescence. The one in the woods, which is smaller in stature than the others, is still a mystery. Perhaps when the seeds develop, I’ll have another clue to consider.

Posted by Ellen Honeycutt at 7:00 AM No comments:

I was outside last week (during that lovely but unusual warm spell) when I realized that a pair of woodpeckers were foraging just off the driveway. It was two pileated woodpeckers, likely a male and female, looking for bugs in decomposing logs.

I have a very natural area between the driveway and the area by the street. When small trees fall down, I am able to leave them in place to allow for all the natural processes to work on them. In the case of the woodpeckers, they are looking for beetle grubs and overwintering insects inside them.

I didn't get a picture of them, one had flown off by the time I came back with a camera. This picture is from last year. It was indeed a very special #amomentinnature to share my space with these birds. It is, after all, their space too. 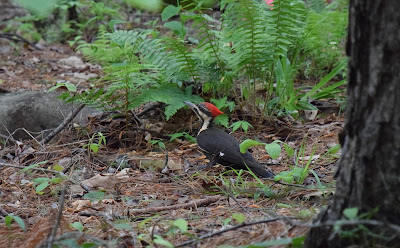 After they left, I took a picture of the wood that they'd been exploring. This one is just about done hosting insects but it will continue to support decomposing insects as well as nourish plants. 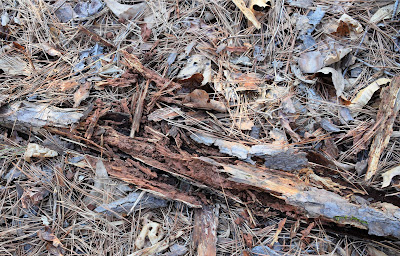 Posted by Ellen Honeycutt at 7:00 AM No comments: 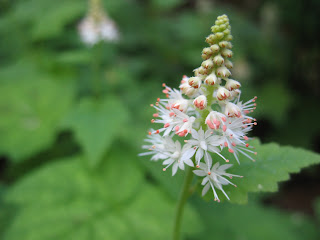 You never forget your first favorites. Foamflower was one of the first native plants that I learned as well as being an early favorite for its beautiful flowers and foliage. It is also very easy to grow and fairly available for purchase. Tiarella cordifolia was the scientific name that I learned. There is new information out there now to suggest that the plant I have in my area has a new name.

According to a new article by Guy Nesom: “Based on study of herbarium collections and foot-to-ground observations in 2021 in Alabama, Georgia, North Carolina, South Carolina, and Tennessee, I found that not one but five species of Tiarella are present in the eastern United States!” The map that he provides shows that the area where I live is exactly in a new species territory (Tiarella nautila):

The article clearly presents the information on which the new species are based and I encourage you to read it. The following quote quickly gives you the basis for the separations:

“The main features distinguishing them are presence/absence of stolons, shape of the basal leaves, and presence/absence of leaves on the flowering stem. When the plants are sorted by these physical characters, the five entities are remarkably consistent in geography, showing sharp boundaries with very little overlap (Figures 1, 2).”

I went back through all of the pictures I've taken of foamflower - in the wild, in my garden, in other gardens - and looked for leaves on the flowering stems. Regarding the presence of stolons: only once in the last twenty years have I come across a plant with noticeable stolons. That was on a field trip to northeast Georgia (perhaps Rabun County). Based on photos in the linked paper (see the references in Nesom's article), this may be Tiarella stolonifera.

Whichever one you have, foamflower is a wonderful native perennial and quite worthy of use in the shade and part-shade garden as well in restoration sites that have its habitat. Both the flowers and foliage are extremely attractive. Basal leaves often persist through the winter, offering a bit of winter interest.