The Jorō Jungle in North Georgia 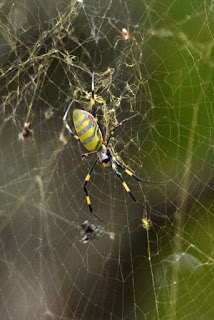 I don’t usually write about bugs that aren’t pretty butterflies or helpful bees whose interactions with native plants are an important part of the ecosystem. This year is different and hearing about a large uptick in non-native Jorō spiders seemed to fit the theme of 2020; the numbers being reported in Forsyth and Hall counties are scary enough for any Halloween-decorated landscape. I felt like I needed to lend a voice to the story, so I went to visit them at a friend’s house in Forsyth.

The Jorō spider (Nephila clavata or Trichonephila clavata) is a golden orb web weaver spider that is actually related to a native species (Nephila clavipes) which is often called the banana spider. Careful inspection of the markings on the body of the female can determine which species is which. Both create a multi-layered, golden-colored web that can span several feet in width. Typically, the webs are made in open woods or edges of a forest, attached to trees and shrubs. These spiders sometimes live in communal webs that span 8-20 feet, although they can be in single webs that are 3-4 feet across.

The Jorō spider was first discovered in Northeast Georgia near I-85 shipping areas in 2014. I saw my first one when visiting Elachee Nature Center in Gainesville in 2018. Apparently the spiders have been moving outward from the original area, spreading now into surrounding counties like where my friend lives.

My friend lives in an established neighborhood with mature shrubs and trees, perfect habitat for these spiders. Over the summer, she began noticing them, jotting down counts of the spiders among all the webs, eventually counting over 70 spiders on her ½ acre lot. She destroyed the ones she could reach, alarmed at how many could be in such a space and concerned about what she might have next year. In walking her dog around the neighborhood and the bigger streets outside the neighborhood, she counted hundreds more. All of these pictures are from those areas. Emails to Georgia experts were met with comments about 'how the populations were certainly increasing' but no real alarm--not a reassuring message when you’re dealing with so many!

Will they continue to spread? It seems likely according to this information from Mattias Johansson, assistant professor of biology at the University of North Georgia Gainesville campus, from a recent article in the Gainesville Times: One thing is for certain, spreading comes naturally to Jorō spiders.Johansson said they use a ballooning technique, in which the spiders spin a web to catch the air current, allowing them to fly for 50-100 miles before latching onto a tree.

How can we help? First of all, report any identified spiders via iNaturalist either online or using their app. Reports like these give the researchers a big boost in identifying their spread. As of October 3, iNaturalist reports 446 observations (most from Sept 2017 forward) in Georgia. Most are in the NE area around Gainesville and Athens, but this year shows the range expanding south into north Fulton County, west to Dawsonville and Dahlonega, and even one as far as Marietta.

Second, consider controlling any found in your yard. Invasive organisms aren’t always considered invasive when they are first found; studies of invasive organisms have suggested that a "lag" time is a common feature in their population growth.  Lag times are defined as a period of time between the introduction of an exotic and its period of invasive range expansion. The spotted lanternfly in the Northeastern US was first found in 2014; it is now considered a major pest because of its threat to agricultural crops, a good reason to sound the alarm (pesky exotic spiders might not get such attention until later in the cycle). I’d hate for us to find out too late that this spider’s rapid expansion puts native organisms at risk through competition or excessive prey capture.

Posted by Ellen Honeycutt at 7:00 AM