I take a lot of pictures throughout the year and not all of them make it into a blog post. At the end of the calendar year, it’s a good time to reflect on the beauty of nature as well as share some of the extra pictures.

I believe that each day is an opportunity to find and appreciate something beautiful in the native plants and creatures of Georgia.

Just like January 2016, we saw snow in January 2017. I happened to be outside with the camera when this buck walked across the driveway. I also like the green frond of the Christmas fern (Polystichum acrostichoides) sticking up in the foreground.

In looking through my pictures from February of 2017, I find it amazing how many things were blooming then. There was red maple, spring beauty (Claytonia virginica), Chickasaw plum (Prunus angustifolia), bloodroot (Sanguinaria canadensis) and blueberry (Vaccinium sp.).


In March, I was very surprised to spot a question mark butterfly fluttering around. This species overwinters as an adult. The adult is not dependent on flowers, feeding on tree sap, carrion, dung, and rotting fruit. You can read more about the butterflies I found in the garden in 2017 here.

April brought a welcome visit from two Monarch butterflies who laid eggs on my emerging milkweeds, one on April 10th and the second on April 13th. The butterflies were noticeably worn looking. I raised over 25 butterflies from those eggs, a success rate of just 50%. You can read about some of the perils for young insects in my blog on critters that lay enough eggs to get some to survive.

I found this gray tree frog in May near the pool. I often hear them in the evening but they are so good about hiding during the daylight hours. The pool does attract a unique set of critters, not all of which belong. During June I found several of these unusual bugs around and in the pool. After some research, I figured out they were dung beetles (Bolbocerosoma bruneri). Some were saved but some drowned before I found them (as clearly they are not meant to be in water).

July brought a surprise set of blooms from my spider lily (Hymenocallis occidentalis). I guess I hadn't been watching it for buds so the bright white flowers were a delight to find.


In my evolution as an amateur naturalist, bugs excite me just as much as flowers these days (you may have noticed). August is a great month for mountain mint flowers (Pycnanthemum sp.) so I like to hang out near it and photograph the pollinators that stop by.

This year was a super year for my Southern monkshood (Aconitum uncinatum) and it bloomed well into September. It even set seeds. I enjoyed noticing that the hummingbirds stopped by for nectar.

I keep my windows pretty dirty but still a bird runs into them every now and then. In October I found this black and white warbler recovering in the potted plants on the deck. It flew off shortly after I took this picture.

Fall is a great time to find fungi and I found this one as I was chasing pictures of fall foliage in November. It looked like a sugar-coated pastry. 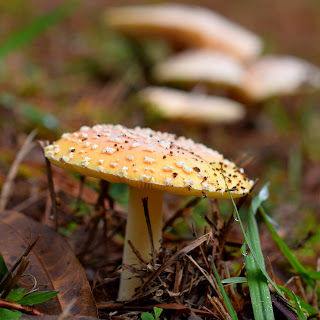 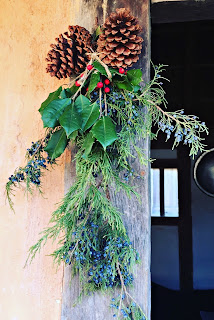 I've fallen into a routine of visiting my dad in Virginia in December. During this year's visit, we visited Jamestown, VA where there is a reconstructed fort area depicting how it might have looked in 1607. Unlike the decorations we'd find in nearby Williamsburg, the holiday decorations were true to what they would have found there naturally. This one was composed of American holly (Ilex opaca), Eastern redcedar (Juniperus virginiana), and pine.

I wish you a Happy New Year, full of beautiful and productive encounters with our native wonders. For more pictures, you can also follow me on Instagram: https://www.instagram.com/usinggeorgianativeplants/
Posted by Ellen Honeycutt at 7:30 AM