Spring and summer is a busy time in nature. Flowers are blooming, birds are having babies, and insects and reptiles are laying eggs too. In some cases, the amount of potential offspring seems huge. Seeds drop from flowers and create carpets of seedlings, for example. Why so many? If you watch closely, you’ll see that not all of them make it, so the drive to survive must hedge its bets with sufficient quantity. 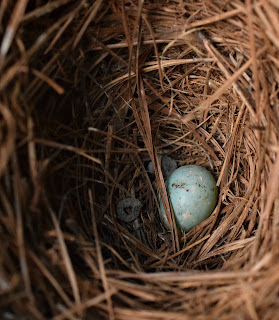 Several birds have raised families in our yard this year. I was thrilled to have the bluebirds in our old box and enjoyed watching them bring food back for the babies. About a month after they fledged, I noticed another pair eyeing the box. I had forgotten to clean out the nest, but I spied a single egg in there. Thinking that they had laid it, I left the old nest alone.

After about two weeks, with no more birds in sight, I checked again and saw the single egg. Well, shoot. Obviously, it was left over from before or is one that was abandoned. There’s one that won’t make it.

I also watched a group of 5 fledgling Eastern Phoebes flit around the yard under the watchful eye of their parents. For a whole week, I could see those parents continue to feed and guide those youngsters. On my way to the mailbox, I saw one baby try to land on a branch. After 3 attempts, he settled for the ground. Those fledglings were extremely vulnerable during that period, it’s no wonder that they had 5 babies!

My experience raising monarch caterpillars this year was a lesson in numbers as well. Two monarch females laid about 50 eggs in April. I collected some of them for my rearing cage. Some of the ones that I left on the plants in the yard were eaten by deer (they ate the tips of the orange butterflyweed while the tiny cats were gathered there). Some of the eggs never hatched. About 3 of the caged ones died suddenly of no apparent injury. Two of them died in their chrysalis (never emerged). In the end, about 26 caterpillars made it to adulthood and were released, just over 50%.

All of this eating means that there need to be enough babies to get past the hazards to reach adulthood. It really is a numbers game.