Have you seen the plants with a haze of white flowers on the roadsides lately?  Many of them are 3-5 feet tall, thriving in both dry and wet ditches, holding their own against non-native weeds.  Small, individual flowers come together on flowerheads, which then combine together to form a larger inflorescence. The appearance of these inflorescences is as almost-flat clusters that together span the width of the plant. This is late thoroughwort, Eupatorium serotinum.


This species and many others in the Eupatorium genus are late summer bastions of nectar and pollen for a variety of insects. Eupatorium is a member of the Aster family (Asteraceae) so it has many small flowers arranged on a flowerhead. Unlike what you might think of as an aster, these plants only have the non-showy disk flowers (the classic aster flower that you might envision has inner disk flowers and surrounding ray flowers).

I actually have quite a few species in my garden –  as many as 5 different ones. As I’ve been thinking about this post, I’ve been watching them, for this is the week that they have exploded into bloom. The insect community that uses them varies over the course of the day, and it’s an amazing parade to watch.


Morning visitors are the bees that spent the night on the flowers and who are just now waking up. There might be a few leftover moths as well, but generally, morning is the quietest time.

In the afternoon, fragrance emerges in the warmth of the day and it’s the busiest time. I see bees of all sizes, from the small green bees to the energetic medium-sized bumblebees to the largest carpenter bees (dragging down every stem they touch). I see flies like syrphid flies and bottle flies. Wasps love it too and there are at least a dozen species that visit!

Of course, we all love the Lepidoptera and, during the daytime, the tiny ones rule! A couple of red-banded hairstreaks have been constant visitors while an Eastern tailed-blue has stopped by several times as well. Skippers and common buckeyes also enjoy it when they’re in the area as well as American lady butterflies and other medium-sized ones. The flowers are too tiny for large butterflies like tiger swallowtails.

It should come as no surprise that there are a few predators as well. Baby Carolina anoles patrol the inner stems for small bugs like mosquitos (yes, they visit too). I’ve also seen a couple of ambush bugs, carefully camouflaged and wedged between the flowers, and there are always spiders.

The flowers stay open all night so the moths continue to visit in the dark, their eyes shining like colored diamonds in the beam of the flashlight that I use to find them. It’s been fun checking on them at night and watching them slurp up nectar. 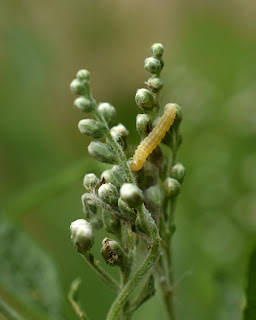 In addition to their flowers, Eupatorium members also serve as larval host plants for at least 42 different species of butterflies and moths. So if you’d like some late summer action in your garden, add some Eupatorium to it.

And don’t forget some of the former Eupatorium members like Joe pye weed (now Eutrochium) and blue mistflower (now Conoclinium). Even though they’ve been kicked out of the genus, they are popular with very similar insects.