When you think of dependable summer flowers, does Silphium come to mind? The bright yellow flowers of this adaptable genus should be in every Georgia garden, yet not many people know about them. Rudbeckia and Helianthus, “cousins” in the Asteraceae family, are widely cultivated for their summer blooms. In fact some people assume that any Silphium they find in the wild is a sunflower (a common name for Helianthus).  Silphium deserves more use and recognition for its own merits.

Rosinweed is not a name to attract your attention when looking for new choices for your landscape. It sounds both sticky and weedy. It apparently does contain a resin that was used by Native Americans but I have never encountered it with ordinary gardening practices. While rosinweed is the common name for the genus as a whole, individual species have more appealing names like cup plant (Silphium perfoliatum, S. connatum) and compass plant (S. laciniatum not native to Georgia).

Native only to North American, several of these robust plants are prairie species, adapted to tough conditions. A fair number are found in the southeastern US and 10 of the 19 species are found in Georgia. I have grown 3 of them in my garden and I highly recommend them all. I will mention that in my deer-infested area, deer do browse the young leaves (and apparently cattle will do so as well if you have any of those).

Starry rosinweed (Silphium asteriscus) was the first one I planted. I was skeptical of its coarse appearance. There is a bonus to its rough leaves – the deer bother this one the least of the three. It starts blooming in June and continues through August, just one or two at time, but always a bloom. By the time it is done, the earliest flowers have already developed mature seed and the goldfinches are after them.

My second species in the garden looks like different from the first. Thick, glossary basal leaves anchor the plant while the flower stalk shoots for the sky where it explodes into a spray of small flowers. If I could grow kidney-leaf rosinweed (Silphium compositum) only for those scalloped leaves, I would still have it. The flowers last for a few weeks and then … again with the songbirds looking for seeds.

Cup plant (Silphium perfoliatum, synonym S. connatum) is the third plant that I have grown. It was given to me by my friend Mary. It struggled for a few years, plagued by roaming deer. Once I expanded my fence, it happily shot up to about 7 feet tall. It started blooming in late June and looks set to continue well into August. 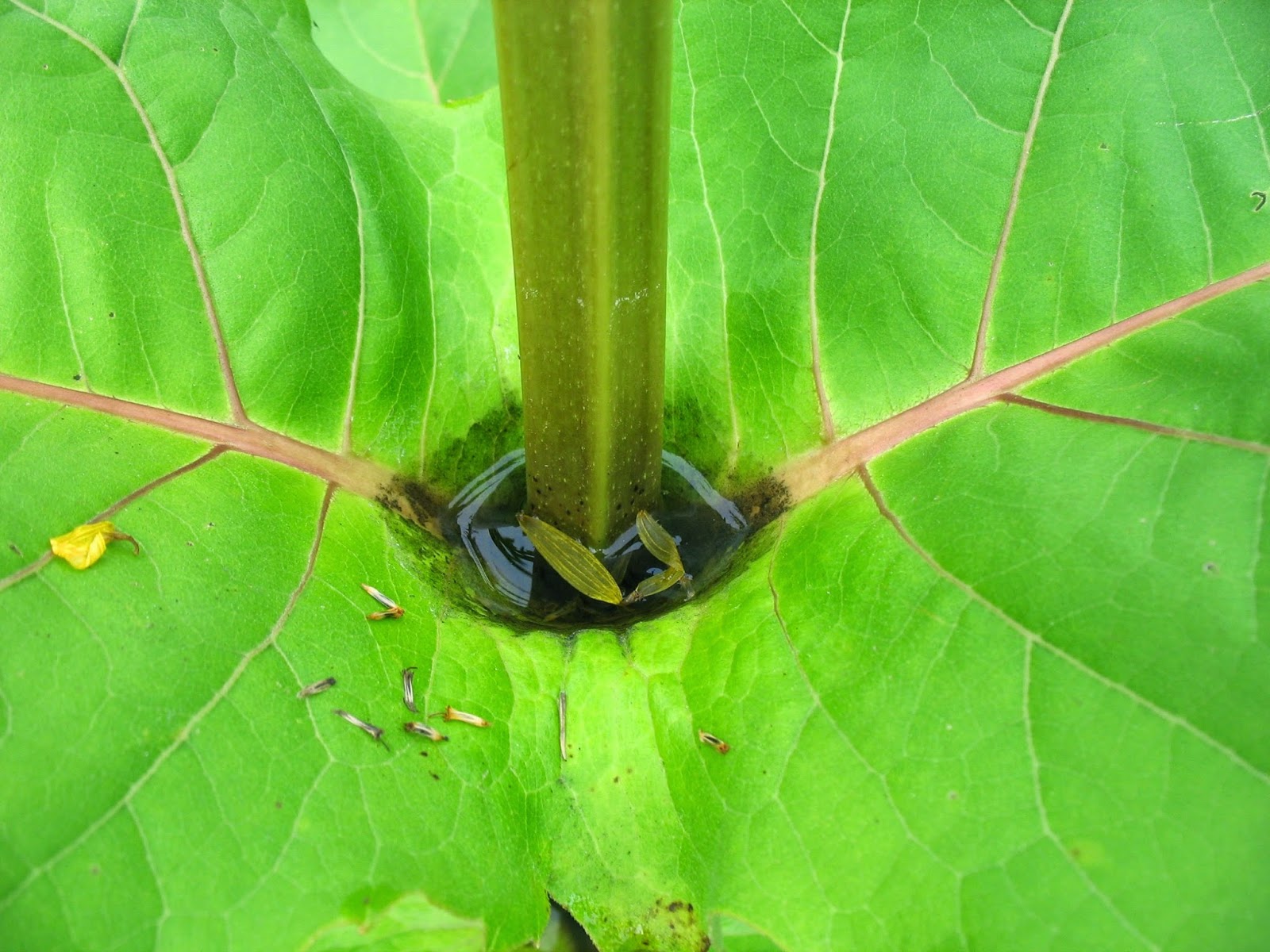 The plant gets its common name from the cup that is formed where the stem pierces the leaves. Rainwater can collect in the cup, providing a reservoir for insects and small birds.

Flowers are popular with pollinators. Mine has hosted a number of different bees. Several posts at Beautiful Wildlife Garden show an array of butterflies on the authors’ cup plants.

The taller species of Silphium have a habit of turning their flowers to follow the sun. As I mentioned, one species has the common name compass plant, but it really could apply to several. To be helpful to the insects that help you with pollination, leave the thick stems of Silphium standing to provide a winter home for those that spend the winter inside plant stems.


So keep a look out for these beauties in the future. If you find some in the wild and aren’t sure if what you found is a Silphium, just check the back of the flower and look for the 4 green bracts. My earlier post about identifying summer yellow flowers has some pictures to help you with that.

I hope you are now encouraged to add one of these great plants to your garden. The Georgia Native Plant Society has sufficiently enthused (about this plant) propagators such that we usually have some at our plant sales. They start very easily from seed.