This was my first canoe trip. It was raining. Trepidation and discomfort make for very unpleasant companions, and it didn’t help that I watched someone flip over while trying to get into a sit-on-top kayak.  Yet with the hope of seeing beautiful and unique things (and with the smartphone’s promise that the rain was moving out), we launched 8 canoes and 3 kayaks into the inky waters off Kingfisher Landing. 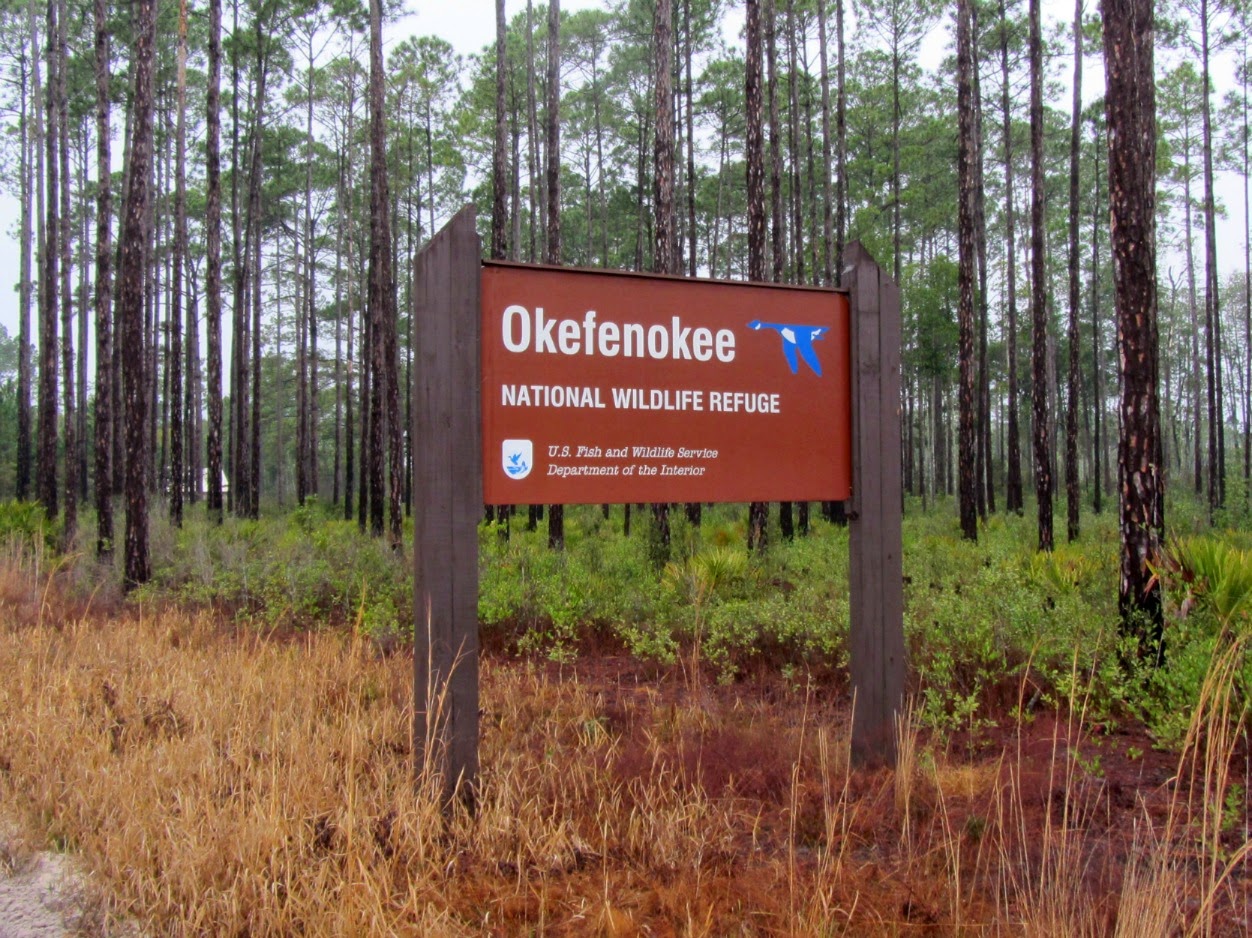 This is part 2 of my weekend in the Okefenokee Swamp. Read part one here.

The watery black path we followed was lined on both sides with water loving trees and shrubs: pond cypress (Taxodium ascendens) and bay trees like swampbay (Persea palustris), loblolly bay (Gordonia lasianthus) and sweetbay (Magnolia virginiana) were there.


Shrubs like the hurrah-bush (Lyonia lucida) were in various stages of flowering; the bright pink buds of the Lyonia were striking against the green sphagnum moss shown here. Also present were swamp ti-ti (Cyrilla racemilflora), dahoon (Ilex cassine) and vines like laurel greenbrier (Smilax laurifolia) and coral greenbrier (S. walteri). A blueberry flashed bright white flowers in one spot.

Our destination was the Green Trail where we hoped to go as far as Bluff Lake, stopping for lunch (eat in your canoe, there’s no place to get out!) along the way. Since it was raining when we set out, I focused on getting used to the canoe and my canoe partner (an awesome guy!) and taking in the sensation of being on the water. There would be time for pictures later.

The first aquatic plant we found was spadderdock (Nuphar advena), with leaves like upright water lilies but strange eyeball-like flowers. It was quite common and we occasionally saw huge floating roots from it that had risen to the surface.

The first pitcher plant we saw was very exciting and our enthusiasm for them never diminished. We saw two kinds, but only one was in flower - Sarracenia flava, the yellow pitcher plant.


Later we did find water lilies (Nymphaea odorata), but most of them were not open in the cool, rainy weather. It did finally stop raining and I was able to take pictures, as you can see. Isn't the reflection in the water beautiful?

Another very common aquatic plant was the goldenclub (Orontium aquaticum), also called "neverwet." I don't know about other days, but it was certainly wet that day! I think the name refers to the fact that the leaves shed water and look dry.


A couple of other aquatic plants were the floating bladderworts (we found other bladderworts on our land excursions) like this Utricularia inflata. Pipewort, also called hat pins, was another plant found here and on land, although the land ones were much smaller. This one is Eriocaulon compressum.


One very interesting aspect was the presence of prairies. These huge areas of aquatic plants create the effect of an open prairie. It is an area that we might have called a marsh in a coastal environment. It's a beautiful and unique environment that can only be seen from a boat. I'm glad I got the opportunity to be there. 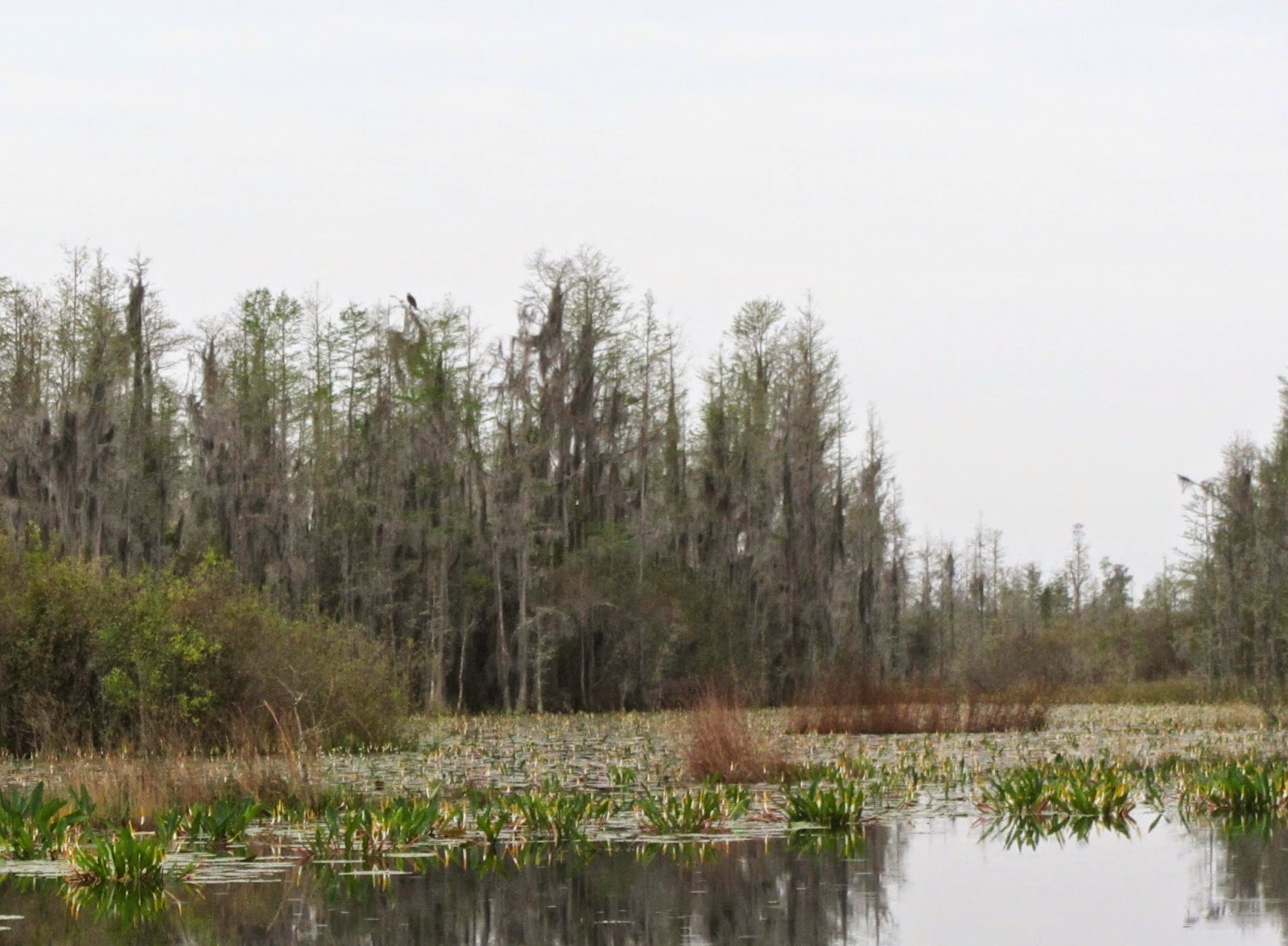