The Magic of Mushrooms

Mushrooms are mysterious organisms.  From the moment we see our first one – usually as a child – we are captivated by them - they are fairy umbrellas, toadstools, agents of enchantment.  They come in all shapes and sizes and a range of colors as well.  At some point we learn that what we see is actually a fruiting body – similar to a flower that turns into fruit or a seed.  But if you’re really lucky, you get a chance to learn that there is far more going on underground than you ever thought.

The underground organism that creates the mushroom you see is call “mycelium”.  If you were able to see it, it would look similar to an underground spider web extending for miles perhaps.  The largest known organism, of the species Armillaria ostoyae, lives in Oregon and is 3.5 miles across; it is estimated to be at least 2,400 years old.  These organisms live in two ways: by decomposing dead organic matter, and by forming a symbiotic relationship with living plants and trees.

While the first way is what many of us have learned about (i.e., mushrooms appear because there is decomposing wood underneath them), it is the second way that is of most concern to those of us that love plants.  Some mushrooms have a symbiotic relationship with living plants and trees.  This relationship is called “mycorrhizal” which literally means “fungus roots”.  In most cases, the relationship is with the outside of the roots, known as “ectomycorrhizal”.  This complex and often far-reaching relationship allows for better absorption of nutrients and moisture because the mycelial web can extend far beyond the trees’ physical roots.  The fungi gain sugar and nutrients produced by the trees during photosynthesis.  It is a symbiotic relationship – each organism benefits.

So the next time that you see a mushroom, think of all the work going on underground.  It makes me want to cheer when I see a mushroom in my yard - because I know that means I have good organisms at work below.
Here are some Internet references for identifying mushrooms - I am not advocating that anyone eat mushrooms.  In fact, I think they are better left alone to reproduce!  We need more of these things.
Mushroom Expert.com
Mushroom Club of Georgia
North American Mycological Association - be sure to check out their photo contest!
And here are some of the mushrooms that I've seen in my yard and in places that I've been: 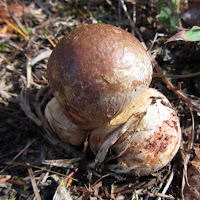 Posted by Ellen Honeycutt at 8:34 AM