Hummingbird Favorites in My Garden

Hummingbirds evoke a joy and wonder in humans that is almost universal: those tiny bodies, those fast wings, that slender beak!  While I don't plant flowers specifically for them, I am always thrilled when my choices meet with their approval.  Here is one of the little guys enjoying a bit of Turk's Cap Hibiscus. 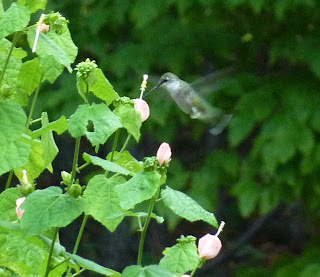 Looking back over the blooming season, here are the plants that I have which attract their attention.  In early spring, the Red Buckeye (Aesculus pavia) feeds the earliest hummingbirds.  The tubular red flowers are the perfect flower for them.  Can you imagine how those clusters of red tubes must serve as a brightly lit buffet sign to passing Hummingbirds?

After the buckeyes are gone, the Salvias come into bloom.  These early summer flowers come in a range of colors, but it is the red and pink ones that Hummingbirds find.  You probably already know they have a fondness for red tones.  Look at these luscious reds - the buds on the Salvia coccinea remind me of little lipsticks.


While the Salvias are blooming, the Red Yucca sends up a spike.  This year was a spectacular display of blooms.  Every day, a few blooms would open up to reveal flowers that were like little works of art!


On a fence near the red yucca is a new addition to my garden: Coral Honeysuckle (Lonicera sempervirens).  This is the native honeysuckle; it has very little fragrance compared to the japanese one, but the color can't be beat!  I had just a few blooms this year, but I know it will be even more floriferous next year.

Plumleaf azalea (Rhododendron prunifolium) starts blooming in late June and continues through July.  The bright red blossoms keep the hummingbirds coming.  This azalea has no fragrance, but the color is spectacular.

The next plant to bloom for my hummingbirds is known as Turk's Cap Hibiscus (Malvaviscus arboreus) or Turk's Cap Mallow.  The species is naturally red, but I also have a pink form that a friend brought me from Texas.  The soft pink petals look like roses.

The last flower to bloom is Cardinal flower (Lobelia cardinalis). The intensely red blooms of this plant capture the attention of the Hummingbirds that haven't flown south for the winter.  Rivalry is intense and you can often see them chasing each other around this plant.

The flowers bloom on a terminal spike that lengthens as it blooms.  The lowest flowers open first and by the time the topmost flower blooms, seeds are already forming from the first flowers.  Each flower makes a seed capsule that holds dozens and dozens of tiny brown seeds.  Cardinal flower can be a short lived perennial, so let some of the seeds fall to the ground to make new plants.  They do best in a slightly moist area, and the rosette of leaves, which can persist over the winter, does not like to be covered by fallen leaves or mulch.


And not blooming in MY garden, but a spectacular plant on the side of the road for at least the last four weeks is Trumpet vine (Campsis radicans).  It is a little too aggressive for most gardens, but it looks swell on a telephone pole or a big tree.

So if you have a mind to garden for Hummingbirds, some of these native plants might work for you.

Posted by Ellen Honeycutt at 5:00 AM