Support for pollinators is increasing as the message about their importance circulates to even wider audiences. Pollinator Week was created twelve years ago and is now celebrated world-wide, taking the message even further. I have been frustrated every year with graphic images that get circulated showing “flowers to support bees” but which contain 80% non-native plants and largely reference benefits to honey bees (which are great but they are not native to the US). 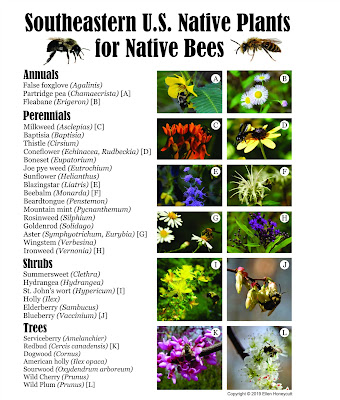 I have told myself for years that someone needs to create one for native bees. This year, I finally did it (with the help of my very talented husband, of course). Since this blog is Georgia-focused, the graphic that we created focuses on southeastern native plants (I hope this inspires other regional lists). Unlike other graphics which focus on herbaceous plants, I have more realistically included some woody shrubs and trees as well since native bees use them too.

The plant photos are my own and the two bee images are educational photos from Clay Bolt’s website. The big one on the left is our most common bumble bee, Bombus impatiens (I love how it is named for a native flower that it frequents, Impatiens sp.). He didn’t identify the bee on the right, but I think it is also a species of bumble bee (please post in the comments if you know it).

I have written many times about supporting our native bees and you can find a list of those posts by clicking this link. The list on this graphic is unfortunately short due to the nature of people wanting a quick and colorful graphic. I deliberately only listed the genus name of these plants; each one can have a variety of species which you can choose to use. You can find 10 pages of native plant recommendations by looking at my Spring, Summer, and Fall lists in my latest pollinator post here.

Native bees have unique relationships with native plants that they don’t have with non-native plants. While some can certainly benefit from the non-native plants recommended in the other graphics, some of them will go hungry. In addition, native plants also support other herbivore insects like moths and butterflies that use them for host plants. And honey bees can use our native plants too, of course.


Feel free to download this graphic (it is a jpg) and share it far and wide. Let’s get the message out louder for native bees and the native plants that support them.

A Plague of Black Locust

I’ve recently returned from a trip to Italy where we learned about how the population of Rome plummeted during various plague events. In evidence this time of year was a whole different kind of plague - an infestation of black locust (Robinia pseudoacacia), a plant that was brought to Europe in the 1600’s from explorations to North America.

I first noticed black locust as we were driving away from the Rome airport. While occasionally I’d see trees that were deliberately planted (large, standalone trees in a park), the majority of trees were in vast thickets along roads. Their growth pattern looked suspiciously like weed infestations of non-native trees in Georgia (like tree of heaven, mimosa, and privet). These trees were in full bloom, and their dangling white clusters of flowers made them all the more noticeable.

When we took a train from Rome to Florence, passing through rural areas, I was dismayed to see how widespread the growth reached into what appeared to be natural areas (although I am not sure how much natural area exists in a small area that has been heavily human-dominated for many thousands of years). I'm sorry I wasn't able to take a good picture of the infestation from the train, and I can't seem to find any representative pictures on the web.

Upon reaching home, I did a little research and found that some people are happy with the tree and are enjoying positive economic impacts from it (“fast growth, valuable and resistant wood, suitability for amelioration, reclamation of disturbed sites and erosion control, honey-making and recently dendromass production”). People concerned about nature conservation have those points to battle in their arguments that it is invasive, “threatening especially dry and semi-dry grasslands, some of the most species-rich and endangered types of habitat in the region, causing extinction of many endangered light-demanding plants and invertebrates due to changes in light regime, microclimate and soil conditions.”


I know that black locust is also considered invasive in North America; USDA shows it present in all the lower 48 states, some of which is surely due to man’s hand in moving it around. The flowers are beautiful and fragrant, a trait that surely convinced many a settler to take a piece to his new land just as he took other favorites. We know that many North American native plants were transported back to Europe by early explorers, but I’m shocked to see how much it has spread (but why should I be given the spread of some invasive plants here?). I guess 300+ years and the hand of man can accomplish a lot.

Georgia is home to at least 22 species of Trillium; more are still being identified so the count is likely to increase. I provided a brief overview of them in an earlier post, but this blog features a very special trillium that I was fortunate to see in the wild recently. On the third day of the Georgia Botanical Society’s Spring Pilgrimage, a vicious line of storms threatened all our regular plans. Georgia’s premier authority on trilliums was our trip leader so he changed our plans on the fly and we went to Toccoa to see Trillium discolor (a plan which was entirely doable in the brief amount of time before the storms hit).

Trillium discolor, often called pale yellow trillium, is a species that is only found in the upper drainage basin of the Savannah River, an area which includes portions of Georgia, South Carolina, and North Carolina. It is a species of special concern, threatened by habitat loss, deer browsing, and invasive plants like Japanese honeysuckle (a plant which was on site).

The species epithet ‘discolor’ has always puzzled me; you might remember another plant with that designation: cranefly orchid (Tipularia discolor). According to information on the Internet, the term means having various or different colors. While the petal color is pale, apparently sometimes they are maroon or green at the base, hence the multiple colors.

This one should not be confused with yellow trillium (Trillium luteum) which has a much larger range, a more intense yellow color, and a very nice fragrance. Tom Patrick told us that this species might have a spicy, clove-like fragrance and we all obligingly got down on our knees to give it a sniff. While clearly there was not the nice fragrance of T. luteum, we really could not identify anything specific (several of us wondering if the definition of ‘clove-like’ was different than our own!). The shape of the petals is also different, with T. discolor petals being described as spatulate, which means broader at the tip than the base.

It was beautiful to see this special trillium in its natural habitat. Several patches were so abundant, it appeared as if hundreds of low candles were lit. The special locations of this plant serve as a reminder that some species can be wiped out just by not understanding their link to local conditions. Luckily many of these populations are in Chattahoochee National Forest land and might be able to be protected.

This is the second of my field trips on the Georgia Botanical Society’s 50th Spring Pilgrimage. I shared highlights from the first one last week. This trip was just across the state line to the Coweeta Hydrologic Laboratory in Otto, NC. Of course, plants recognize no state line so we saw many wonderful plants that are found in Georgia as well.

A brief background on the lab from their website: Occupying nearly 5,400 acres and in existence since 1934, the Coweeta Hydrologic Laboratory is world-renowned for its research in forest hydrology. In 1918, the Forest Service bought the tract and designated it part of the Nantahala National Forest in 1923. The site was set aside as the Coweeta Experimental Forest in 1934. Measurements of rainfall, streamflow, climate, and forest growth began almost immediately.


We encountered several of their informational signs on their experiments (measure water flow with existing hardwoods, cut all the trees in an area down, measure water flow, plant pines back, measure water flow ….). The real treat was exploring their thousands of untouched acres along streams, in rich coves, and even at the top of the mountain on an outcrop.

Our next stop was in a rich cove, which was populated with even more special wildflowers like red trillium (Trillium erectum), yellow mandarin (Prosartes lanuginosa), and showy orchis (Galearis spectabilis). Our trip leader had mentioned that we’d see Carolina vetch (Vicia caroliniana) and perhaps its beautiful butterfly, the Silvery Blue (Glaucopsyche lygdamus) – and we were thrilled to find just that! We continued to see it alongside the road on several stops; in addition, some folks saw a mating pair of Eastern Tiger Swallowtails.

After lunch, we went to another streamside spot to find a real treasure: a blooming instance of Fraser’s sedge (Carex fraseriana). We had to traverse through poison ivy and a Rhododendron thicket to get to this single specimen, but it was worth it! Near the road was another fine population of the vetch and accompanying Silvery Blues. Someone spotted a mountain bellwort (Uvularia puberula) and, as is our way, the rest of us hustled over to admire this new (to us) species of wildflower.


From here, we got back in the cars and followed a long and winding road up to a very high point to see another special plant: the rock harlequin (Capnoides sempervirens). Its relationship to the Fumariaceae family is evident; it was once considered to be in the Corydalis genus. One of the native bush honeysuckles (Diervilla sp.) was also there and there was huckleberry (Gaylussacia sp.) all around us and a just-emerging clump of lady slippers (perhaps the pink one: Cypripedium acaule). High up there, a serviceberry (Amelanchier sp.) was still in full bloom.

Our leader wasn’t done with us yet! From this peak, we made our way back down, passing loads of the pretty Robin’s plantain (Erigeron pulchellus) and good views along the way (I was careful not to look as the road was narrow and the edge was steep). Our last stop was a wet rock face that was covered up in cliff saxifrage (Micranthes petiolaris). Nearby there was one of the summer-blooming Heuchera that loves wet spots (perhaps Heuchera villosa). We also found some blooming native strawberry (Fragaria virginiana). All in all, it was a great place to see some great native plants.


Posted by Ellen Honeycutt at 7:30 AM No comments: