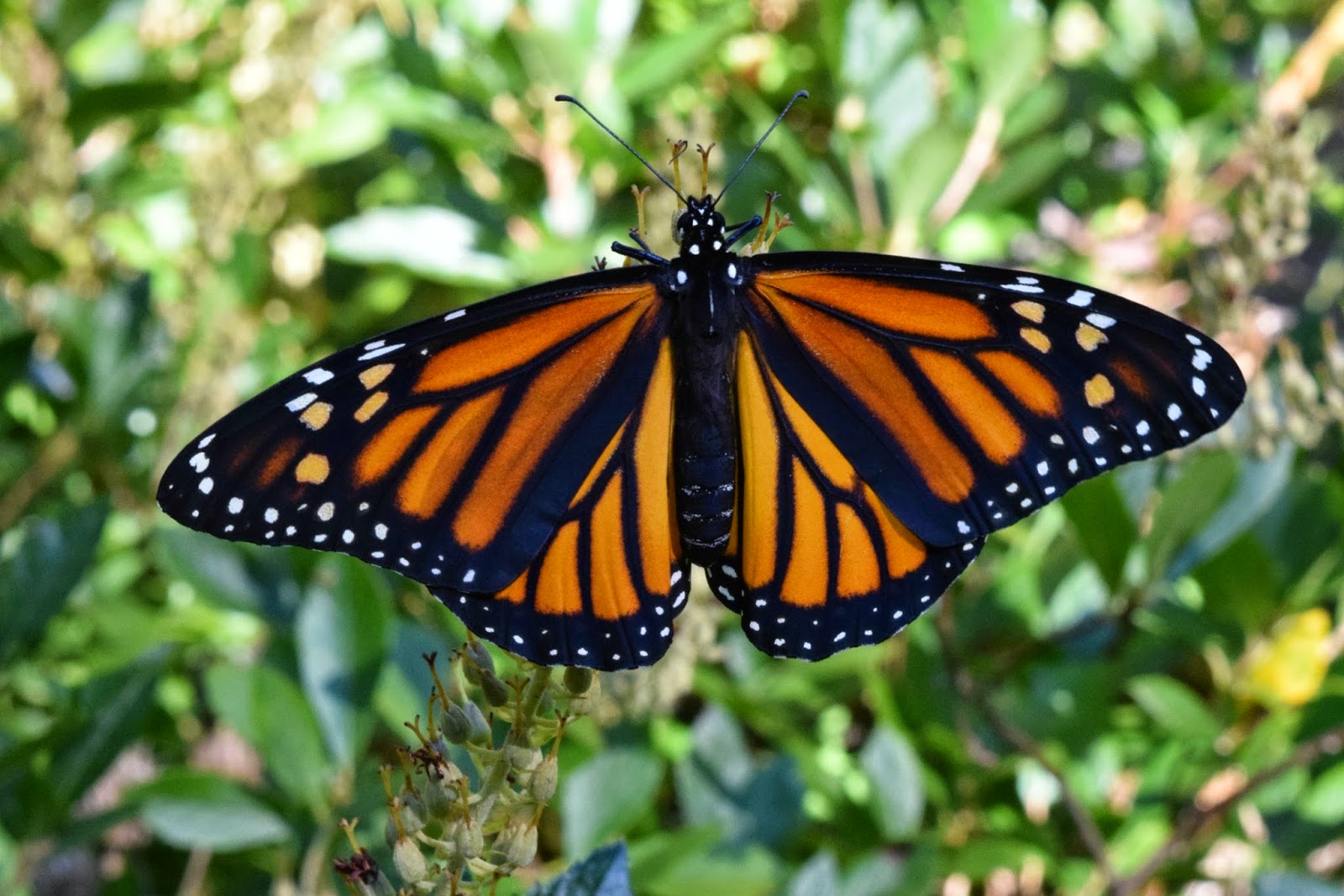 I need to revise some of MY earlier thoughts on monarch butterfly behavior in Georgia. Previously I wrote about my lonely milkweed and my lack of monarch eggs. That part is still true. A monarch has still not laid an egg in my garden.

However, she was not very far away! 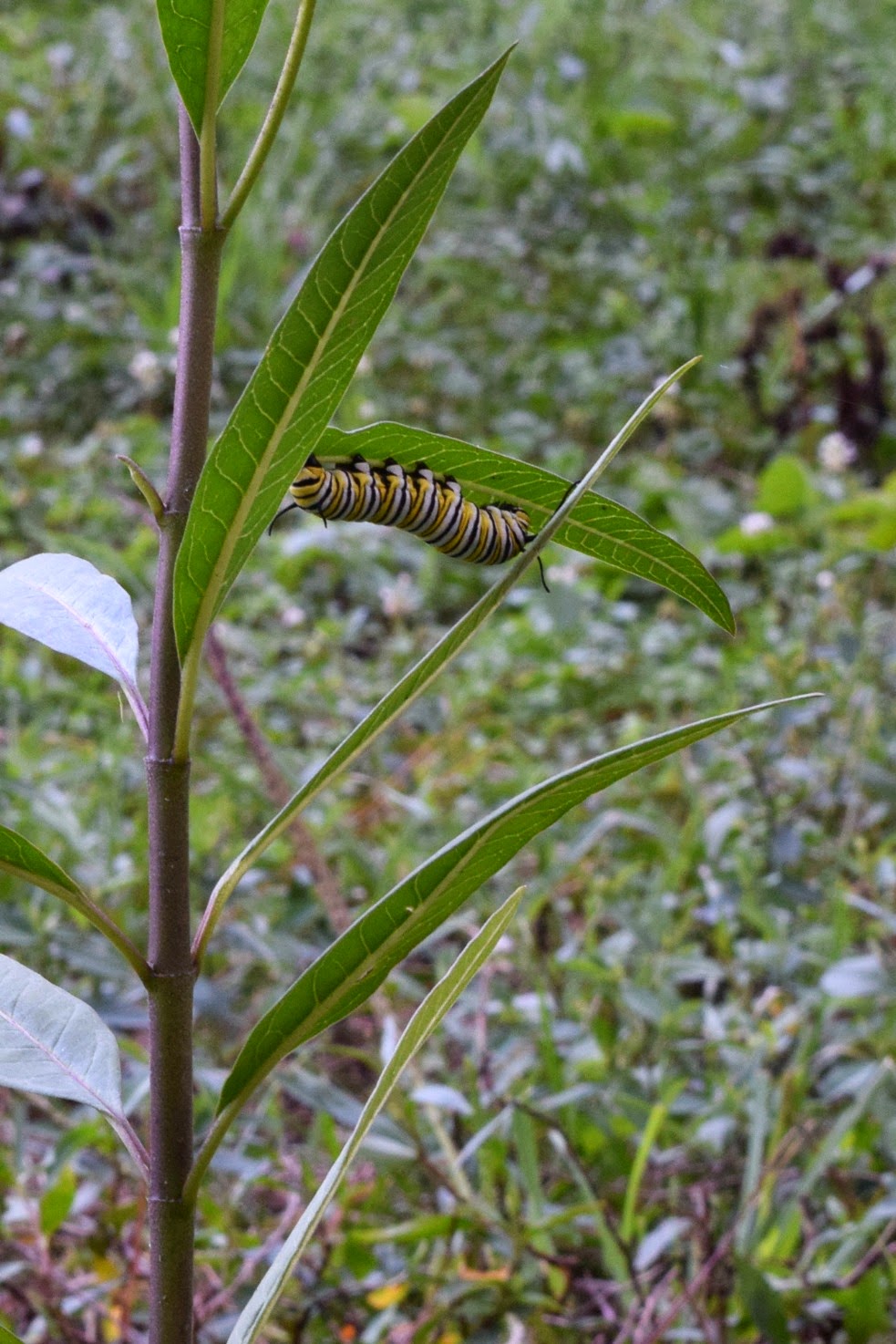 About 3 weeks ago I found monarch caterpillars on milkweed growing in a field along my usual walking route. This field has 3 horses and occasional goats so I was surprised to see tropical milkweed (Asclepias curassavica) growing just inside the fence; there was a group of about 10 plants.

I decided to bring a couple of the caterpillars home with me to raise (they looked like they were seriously eating their way through the stock there).


I have some tropical milkweed at home in a pot (grown by accident as it was labeled as seed of a different milkweed). I put the caterpillars on it. They ate like crazy! But after two days, one disappeared (and a small green blotch was left behind – did a bird get it?). I put the remaining one in a protected enclosure and it formed a chrysalis on a piece of window screen.

I kept checking that milkweed in the field. After just one day, all of the caterpillars were gone. I wondered about birds. That field has always been a bluebird hangout.

Currently there are no new caterpillars and the plants have grown all new leaves. Seed pods are forming and new flowers are blooming.


After 13 days in the chrysalis, mine was ready to open. Of course it happened while I was busy inside, but when I popped out at 2:45 pm to check, there she was, her wings already plumped up. She still needed some time to dry. I could tell it was a female by the markings. 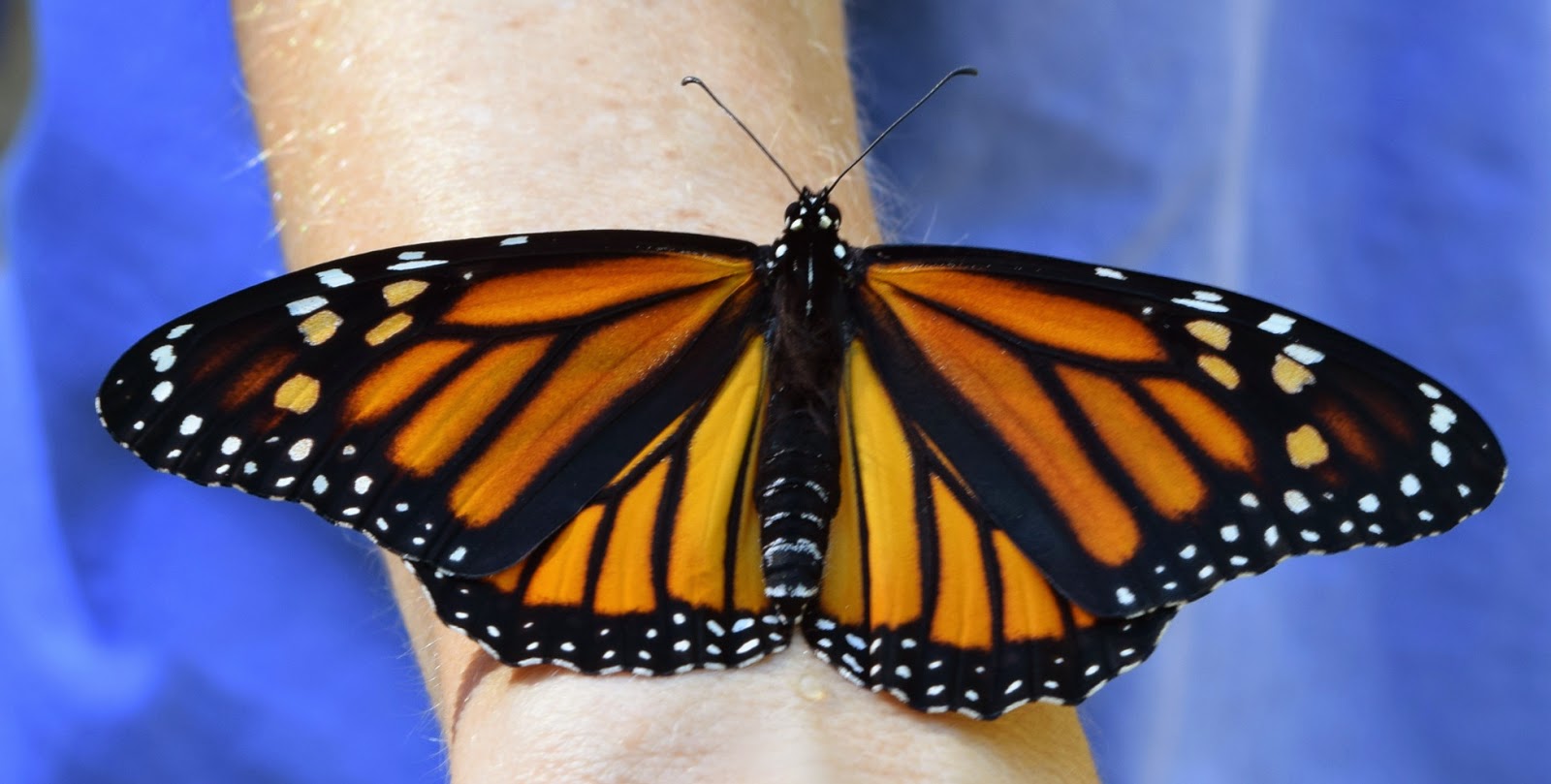 When she was ready, she began exploring the area. It was clear she also needed time to get used to her new wings and legs. I let her crawl up onto my finger and she quickly moved up to my arm. Those four tiny black legs were each tipped with a sharp claw!

She spent the next 90 minutes figuring out her new body. Her first wobbly flight was adorable but short. She was a fast learner, however, and it seemed like she was ready to be on her own about the time I had to go back inside for my 4:30 meeting. She flew away for good while I was gone.

This was not the only monarch in the area, of course. In the past several weeks I had heard of sightings from friends. Yesterday I saw another adult while at the nature center in Roswell. They had had caterpillars several weeks earlier as well.

So I am happy to report that Georgia locations can not only provide nectar for these migrating beauties, but they can also help create the next generation. Adios to our single beauty. Hope you make it all the way to Mexico.

Falling Into the Coastal Plain


Recently I participated in a field trip to the Fall Line Sandhills Wildlife Management Area (WMA) near Butler, GA in Taylor County. The area has only recently become a WMA; it was purchased in 2006 from a timber company. You may have heard the term “fall line” before when reading about some of Georgia’s physiological characteristics. I couldn’t describe it any better than this DNR page on the WMA:

The name Fall Line Sandhills comes from the tract's transitional location and predominate upland habitat. The Fall Line is the boundary between the crystalline bedrock of the Piedmont physiographic province just to the north and the sedimentary conditions of the Coastal Plain province found here. As streams flow across this boundary, they more readily erode the sandy Coastal Plain side, creating cascades at the transition. When strung together across the state and beyond, these cascades, or falls, create a fall line.

This transition coincides with the shoreline of ancient seas and just below it are remnant beach dunes. Today, these landlocked dunes have unique plant and animal communities on deep sandy soils characterized by ecologists as sandhills. Many Coastal Plain plants and animals are very dependent on this habitat type. 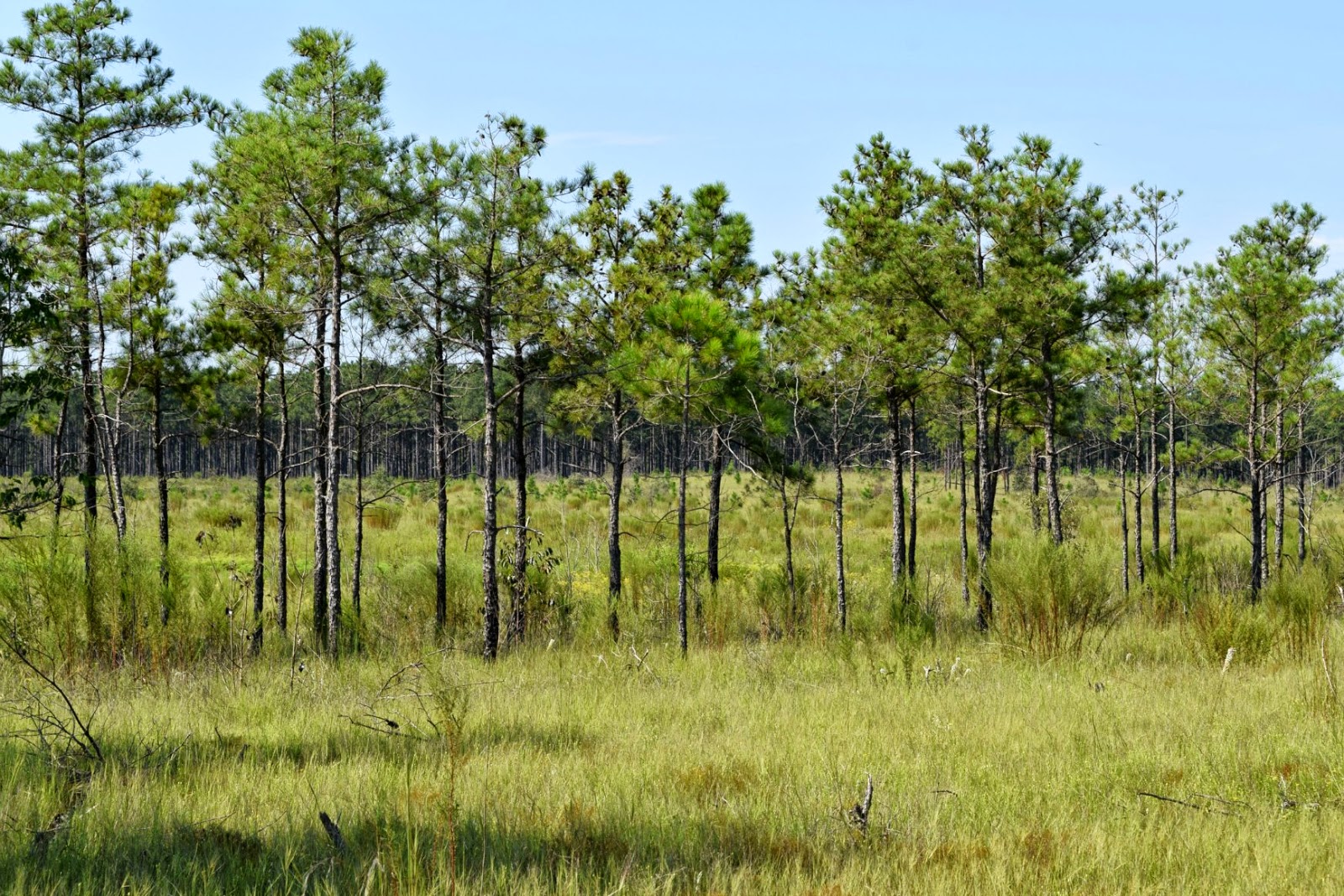 As we gathered at our first stop on the field trip, our DNR guides encouraged us to look around and imagine an ancient sea lapping the shore in the distance. The sandhill shapes were clear, and a few of the remaining timber pines (loblolly and sand pines) were present; but other areas had been cleared manually and with fire. The cleared areas were the ones we wanted to see for there we would find thriving populations of unique Coastal Plain wildflowers.

In this first spot we found plants like elegant blazing star (Liatris elegans) and the Coastal Plain dawnflower (Stylisma patens); the dawnflower's heritage in the morning glory family was evident. I thought it was a tiny morning glory at first (what a tiny flower, look at those grains of sand next to it).

We were pleased to find in bloom the sandhill goldenaster  (Pityopsis pinifolia) and Carolina pineland cress (Warea cuneifolia). Several of us crushed the foliage of the aromatic orangegrass (Hypericum gentianoides) to get the experience of exploring plants from several senses. The goldenaster's foliage was pine-like.

We walked a bit to get to a naturally low area that is supporting moisture loving plants like inkberry (Ilex glabra), purple foxglove (Agalinis fasciculata), blue lobelia (Lobelia puberula perhaps), oaks and pines and way too much poison oak (Toxicodendron pubescens) for my liking (but I know wildlife likes it).

Our guides talked about the bird species that they have observed returning to the area thanks to their work restoring the natural communities - birds such as Bachman’s sparrow. Frogs and other amphibians are coming back as well. The old “build it and they will come” story is still true, I guess. Of course, this is more of an “un” building effort as they work to remove what should not be here.

It was all so exciting that I barely noticed what trees and shrubs were there! That is not normal for me.

Next we drove to another wet area that supports a recovering population of pondberry (Lindera melissifolia). Most of us are more familiar with the related spicebush (Lindera benzoin). The more colonial (growing by stems) pondberry has suffered from habitat loss. A crushed leaf has a faint spicy scent like L. benzoin but the pondberry fruit seems larger and it was in perfect form that day.

The soil beneath it was thick with sphagnum moss. Dragonflies were abundant and birds called in the distance. It was a beautiful and peaceful area.


Nearby Black Creek WMA was our next stop and there we found so many more new plants. Especially abundant was longleaf sunflower (Helianthus longifolius). Our leader pointed out that one distinguishing characteristic for this species is the presence of basal leaves (at ground level).

On the other side of the road several plants called out to us with pink-tinged creamy blossoms; it was sandhill wild-buckwheat (Eriogonum tomentosum). We also found Yucca filamentosa festooned with curling filaments, purple ironweed (Vernonia angustifolia), more sandhill jointweed (Polygonella), Eastern greeneyes (Berlandiera pumila) and the semi-parasitic southern oak leach or false foxglove (Aureolaria pectinata). They all appeared to be growing in pure sand so clearly these plants have adapted to these conditions. So perfectly suited to this place.

We followed a path through scrub, past more sunflowers and the occasional blazing star (Liatris tenuifolia), enjoying the day with the sound of cows mooing just over the band of trees that separated us from a pasture.

We came to a low wet spot with special plants.  Sundews (Drosera capillaris) were sprinkled among fringed meadowbeauty (Rhexia petiolata) and bog cheetos (Polygala lutea). Orchids were past blooming but exciting to see.


From there we were off again in the cars, hoping against the approaching rain, to find a few more special things. We did find a gopher tortoise burrow and blooming cottonleaf goldenaster (Chrysopsis gossypina) but then the rain came and we packed up.


Click on any picture to get to a slideshow of full size pictures.