Caterpillars are life – life for beautiful flying creatures as their larval form ... and all that depend on them.

After a recent talk at the Cullowhee Native Plant Conference about caterpillars, I am energized and prepared to identify and appreciate more caterpillars than ever.

Background: As most of you know, caterpillars are the larval form of butterflies and moths (Lepidoptera). Local insects like Lepidoptera have evolved over time with their local ecosystem and the relationships they have with organisms like plants are both necessary and complex.

David Wagner from the University of Connecticut presented his topic “Native Plants, Caterpillars, Birds – A Story of Connected Fates” on Friday morning to the main group. David is author of “Caterpillars of Eastern North America,” now in its 8th printing since 2005.

His talk was lively and informative, a reflection of his keen interest in and knowledge of caterpillars. Some of the things I learned:

And that brings us to the third piece of the relationship (and the talk). Birds eat caterpillars and for some birds they are a significant source of food, if not as an adult then certainly as a nestling.

If you love having birds in your yard then you need to love having caterpillars. Let out a big cheer every time you find a new one!

After the talk I bought David’s book and I’ve been reading a section at a time: the slug caterpillars, the loopers, the inchworms, the brushfoots, the hawkmoths, the prominents, the tussocks … each section covers a different group.


I like that each species includes a list of common foodplants. I love that there is an index by foodplant! So if you see something eating on a particular plant, you can look for it that way. Want to know what's eating your honeysuckle ... look it up.


I learned that fall webworms are the ones I usually notice; eastern tent caterpillars build nests in tree crotches while webworms engulf the branch. Some caterpillars like tussock moths glide to a new place to eat on a thin strand of silk (you've seen this right?); this is called ballooning.

Some of them are gorgeous! Look at this pink-striped oakworm (which was dead when I found it). Nature is amazing.

While I see a lot of caterpillar evidence in my garden (chewed leaves, frass/poop), I don’t often find the actual caterpillar.


With both wasps and birds (as well as other critters) being predatory on caterpillars, I like to think that not seeing many means the ecosystem is in pretty good balance.

So next time you see a caterpillar, don't think of it as icky or creepy ... think of it as LIFE. And don't worry about chewed leaves, they grow back just fine.


P.S. This is my 200th entry on this blog. Thanks for all your support!


About 5 or 6 years ago I went to a GNPS workday at a restoration site and one of the leaders brought some free plants to give away. I took a tiny, 4-inch woody plant known as devil’s walkingstick (Aralia spinosa). People warned me not to take it but I knew that it would be beautiful and perfect for the tropical feel around our swimming pool.

It is native to my area and has a huge compound leaf. When it blooms, it creates a giant inflorescence of tiny flowers (technically not a single flower despite the name of this post) that towers over perennials and other shrubs. Pollinators love the plant and swarm the numerous flowers.

Once pollinated, each flower turns into a small purple berry – a feast for the birds. You can see a picture of the berries here. Its bi-pinnately (twice divided) compound leaves are the largest leaves of any native continental U.S. plant - up to six feet long in ideal conditions according to Floridata.
So why would anyone steer me away from this wonderful plant? Well, it can spread by runners. So far mine has not popped up a single clone, but I know people that have fought its march across their landscape. I suspect that once it starts to sucker then it won’t stop.

I’m sure the berries, when distributed by wildlife, create new plants. I have seen it on GNPS rescue sites, scattered here and there, and appearing to be less of a suckering situation in that case and more a case of seedlings.

The first time that I saw it bloom was on the streamside near the arena at the Cullowhee Native Plant Conference. It is appropriate then to find mine blooming for the first time during the same week thatthe conference occurs this year. As I left for the conference on Wednesday, the first flowers opened and I spied a bee circling the flower. 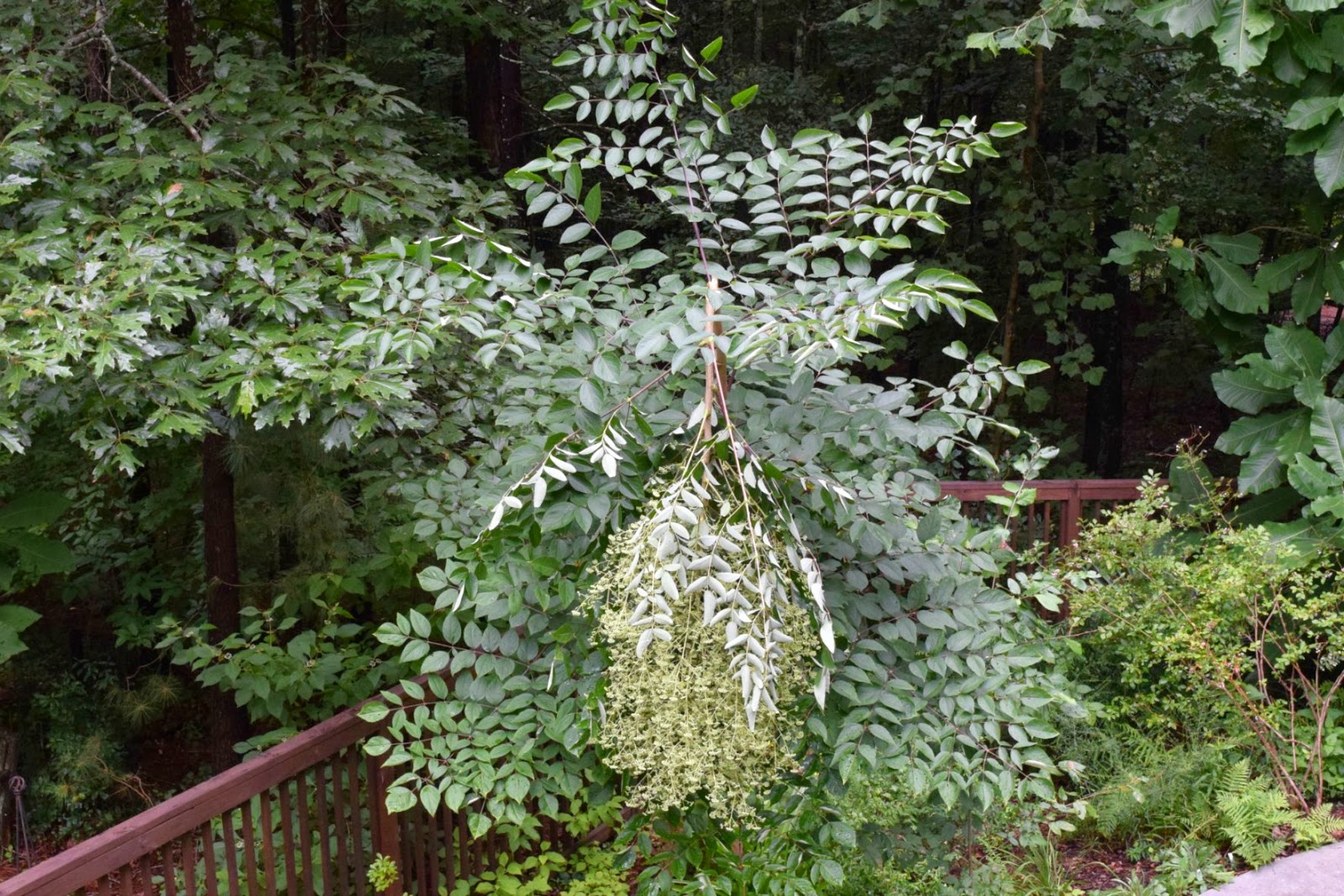 I returned on Saturday, eager to photograph the visiting insects. Unfortunately, a heavy downpour on Friday night caused the flower to be so heavy that the plant was bent over at the top. By Saturday afternoon the weight proved too much and the twig supporting the flower snapped.

Of course I debated continuing with this post, but I decided it is part of life in the garden. If I'm lucky, enough tissue is still connected to keep the flower alive for a little longer, supporting a few insects. It is way too tall for me to deal with in terms of pruning it off anyway.

I look forward to next year's flower show now that the plant is mature enough to flower.
Posted by Ellen Honeycutt at 10:54 AM 2 comments:


Summer blooming shrubs are some of my favorites because, frankly, blooms in the hot and muggy days of summer are a welcome sight. These hot days I have perennials like Rudbeckia, Silphium and mountain mint (Pycnanthemum), but a blooming shrub is extra special. Like many native plants, the blooms of buttonbush (Cephalanthus occidentalis) go beyond being a pretty flower for humans to admire.


What good is a flower if it doesn’t attract insects? (Get back to me on that.) Insects need a constant source of nectar and pollen from spring to fall. The summer blooming plants are an important part of that food continuum for them.

I don’t have the right conditions for buttonbush in my yard. It wants some sun and will do best adjacent to a pond or a wet area. I’m running out of available sunny places and I used up all my wet spots with other things. My neighbor has a beautiful, large buttonbush right next to their pond (courtesy of the forward-thinking, nature-loving previous neighbor), so I go over there to see who visits the flowers. 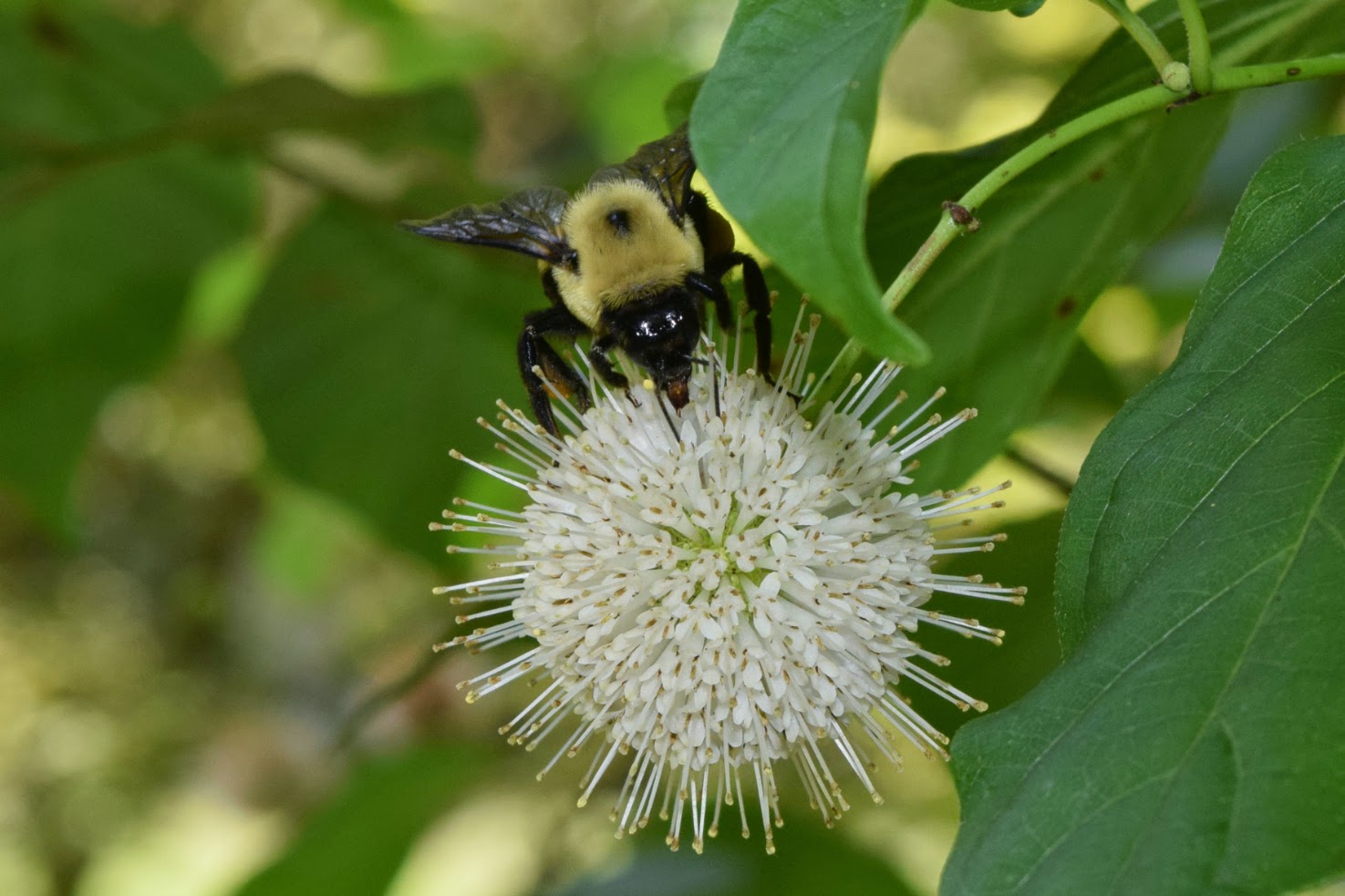 Bees have been the most frequent visitors to the blooms. I never tire of watching a bumblebee dive into a big blossom – in this case a 360-degree blossom! You can see some great close up pictures here. I understand that hummingbirds are fond of it as well. 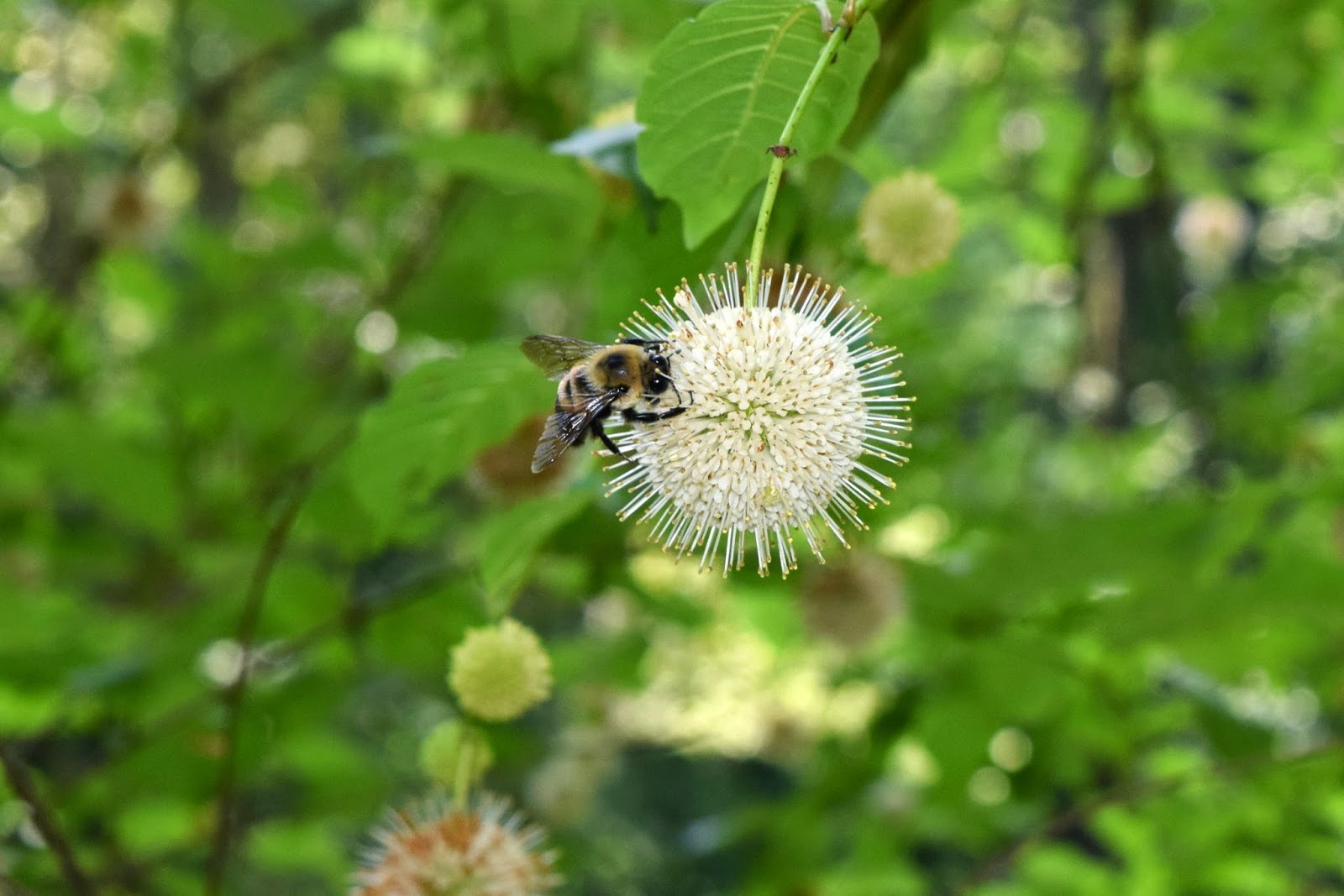 As I watched the bees and a lone silver-spotted skipper work the blooms, a female tiger swallowtail arrived. Her wings were torn but she was hungry. I imagine she has had a hard life and is probably near the end. After she sipped nectar from several flowers, she fluttered up into the cool, green canopy of large tuliptrees (Liriodendron tulipifera) where hopefully she will lay a few more eggs for the next generation.


In addition to this being a great plant for insects, the unusual flower makes it perfect as a summer focal point plant. You can opine to your visitors that perhaps early settlers used the dried seed heads as buttons, but frankly I think they shatter too easily for that to be possible. Perhaps "honeyballs" is a more apt common name.

There's no doubt that it's great for ponds and wet areas, a hit with pollinators and a lovely way to have flowers in the summer. Birds do eat the seeds, especially ducks, I've heard. That makes it even better. Look for one at a native plant sale soon.

Posted by Ellen Honeycutt at 7:34 AM 3 comments:


There aren’t many plants that start blooming in the hot summer months. Pycnanthemum (pick-nan-the-mum) does and it is definitely one that you should pick to have in your garden!


Pycnanthemum is a genus of perennial plants endemic to North America (that is, native only here). The common name is mountain mint (or mountainmint depending on how you spell it). Native throughout the eastern and central states, this genus has a fair number of species to be found in Georgia. The genus is part of the mint family (Lamiaceae) and, not surprisingly, the foliage is aromatic, sometimes very strongly so.

Until the plants flower, I don’t think most people would notice them. Their “plain Jane” appearance and the tendency of some species to spread by runners would probably land them squarely in “weed” territory for some people even. Once they bloom, however, they literally come alive as pollinators flock to their tiny flowers.

What appears to be a single flower to us is a cluster of tiny individual flowers. Many plants also have bracteal leaves that are whitish in color, creating an even stronger appearance of one large flower.  I am always amazed at the variety of insects that these flowers attract.

Several years ago I found a large stand of P. incanum on the side of the road that was delighting a group of Eastern tiger swallowtail butterflies. I have also seen the flowers visited by wasps and bees. There is always someone on the patch of P. muticum in my garden.

[By the way, appreciate your wasps - they are carnivores, catching other insects to feed to their young so they are considered beneficial insects.]

I recently added narrow-leaf mountainmint (P. tenuifolium) to my garden. I got it from an authorized GNPS rescue site that had a hot, dry area. The finely textured foliage gives it a very different appearance. It does not have the extra bracteal leaves, but the flowers are unmistakably mountainmint. P. incanum is found in the shadier edges of the same site.

So if you're looking for more summer flowers to support pollinators (and enjoy yourself), pick Pycnanthemum to add to your sunny spot. By the way, deer don't bother it - a real plus for me!

Posted by Ellen Honeycutt at 9:34 AM 2 comments: