This is part two of my hike to Mount LeConte in search of a rare gentian; part one covered the hike up via the Rainbow Falls Trail. Here I show you some of what we found up there and on the hike back down via the Bullhead Trail. The first thing we found at the top was a profusion of summer flowers around the buildings at the Lodge. 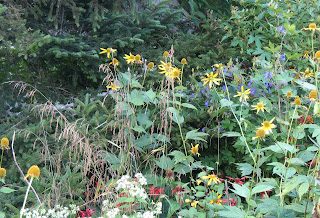 While the plants around the LeConte Lodge are a bit "cultivated" (and I use that term loosely), one can still enjoy the beauty in the combination that man and nature have put together. A wild and colorful mountain top meadow is the overall effect: The green headed coneflower (Rudbeckia laciniata var. humilis) and white snakeroot (Ageratina altissima var. roanensis) that we saw on the way up is joined here with a vibrant blue monkshood (Aconitum uncinatum), a few blooms of scarlet beebalm (Monarda didyma) and some grasses. This is a combination that would be reproducible in my own garden (given enough space!).

others once we got to the top. We were able to find the Gentiana linearis and another very special plant with it: grass of Parnassus (Parnassia asarifolia). It is not a grass and the name Parnassus goes back to its similarity to a Greek plant named for a mountain in Greece. It's presence is generally associated with wet areas or seepages. We find it in Georgia as well. It has a beautiful white flower with a pattern that appears to be etched into the petals.

The two plants were found in a very rocky area that obviously has constant moisture. It was fabulous to see such a unique and natural area. We were not expecting to find the Parnassia so it was a delightful surprise.


After a good night's sleep in cabins with no electricity, we had breakfast and headed down the mountain via the Bullhead Trail. This trail is not very scenic but plant nerds can find good in almost any natural setting. Angelica venenosa, asters and goldenrod were some of the perennial plants that we saw. The bees were very fond of these plants, especially the angelica.

At lunch we stopped in an area with large boulders and rocky soil. The sides of the path were thick with eastern teaberry (Gaultheria procumbens). Jane convinced me to try one of the berries. The taste was minty but it also reminded me of the wax lips we got for Halloween when I was a kid. I noticed some red berries above my head and was happy to identify the shrub as one of the deciduous hollies; given the elevation, perhaps it was Ilex montana, mountain holly.


As we continued through a dry area, we found different goldenrods (such as Solidago erecta), a lone blue aster, and plenty of yellow false foxglove (Aureolaria flava).  We find all of these in Georgia, and I do love the cheerful late season blooms of the false foxglove.


And the last thing of the day - less than a mile from the trailhead - we saw a black bear! He was moving too fast for a picture. He paused once in the middle of the trail, and we got a good look at each other. Then he took off at a very rapid rate through the undergrowth and was gone.

In Search of Gentian


I never thought I’d go hiking in search of a single plant, but in August I did just that. After I published the story of my hike to Gregory Bald in the Great Smoky Mountains, my friend Jane asked me if I would hike with her in the Smokies to find Gentiana linearis (narrow-leaf gentian). The hike and the plants we saw along the way – many of which also make their home here in Georgia – make for a colorful tale.  The first color is blue since that is the plant that sparked the trip.

The narrow-leaf gentian is not found in Georgia, although many of its relatives are. It is found in Tennessee, where the plant is listed as threatened, and further north. Many of the Gentiana species share the "closed" look of this flower. Bumblebees pollinate this flower by prying open the top of it and going inside. If you are interested in gentians, I recommend the book "Gentians of the Eastern United States" by Jim Drake. Jim helped me id several other gentians that we found on the trip.

Along the way to find the gentian, we hiked up the Rainbow Falls trail to LeConte Lodge where we planned to spend the night. There were four of us: Jane, me, my husband and my daughter (only two of us were interested in the plants). The blooming plants along this trail were best described as asters and goldenrods. The white wood aster (Eurybia divaricata) was an early and constant companion and was eventually joined by the very similar looking whorled wood aster (Oclemena acuminata) as we climbed higher.


The low elevation goldenrod was the shade tolerant Solidago caesia but we saw several other species along the way which I have not yet positively identified. Yellow is such a cheerful sight. 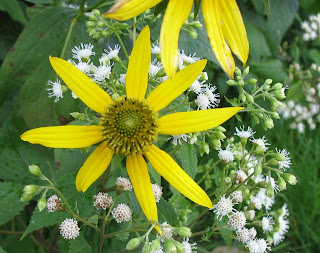 At lunchtime we found a nice area with green headed coneflower (Rudbeckia laciniata var. humilis) and white snakeroot (Ageratina - the species was unclear) near the stream.

We climbed higher and higher, enjoying the change in the plants as we went. We found unusual plants like mountain fetterbush (Pieris floribunda), Appaplachian bunchflower (Veratrum parviflorum), Indian pipe (Monotropa uniflora), and large-leaved hobblebush (Viburnum lantanoides). This was a new viburnum for me on my unofficial life list of native viburnums. Throughout the hike (both days) we also saw a lot of Viburnum nudum var. cassinoides which is a very happy resident in my garden. The difference between the two viburnums in terms of berries and leaves is remarkable. The berries on both will turn from red/pink to blue in time.

As we closed in on our destination, we found pink turtlehead (Chelone lyonii) in the moist areas along the trail. In a rocky outcropping, we found a population of sand myrtle (Leiophyllum buxifolium) with other heath plants (Ericaceae family). The outcropping had great views from the side of the mountain.

I've always loved turtlehead - the white form (C. glabra) grows in Georgia. Do you see how the flower looks like a turtle with his mouth open?

Well, this story is longer than I thought it would be. I will close here with a picture of the wonderful sunset on Mount LeConte. Part 2 of this story will be "Gentian Found" and will show what we found on the mountain and on our trip back down the next day along a different trail.

Posted by Ellen Honeycutt at 7:45 AM 3 comments:

Wild roadsides beat the snot out of the average person's garden when it comes to biodiversity! Maybe not your garden or my garden - but the average garden in the US offers very little biodiversity ... and I would add that is especially true in the fall.

Here a buckeye butterfly gets nectar from a fall blooming thoroughwort (Eupatorium serotinum); beetles, bees and wasps were nearby. When you see these drifts of white flowers in the fall on the roadside, think Eupatorium.

Today’s urban and suburban landscapes have large expanses of lawn grass, green blob shrubs, blooming shrubs like knockout roses and fringeflower, and ornamental trees such as crape myrtle strategically arranged like lollipops throughout the landscape.

These landscapes are testaments to man’s ability to “control” the natural environment and make it conform to his idea of “nature” by arranging them in groups. As a bonus, these plants respond well to pruning, allowing homeowners to create “well shaped” shrubs.


Further control is gained by choosing “pest resistant” plants which largely consist of plants imported from other parts of the globe - shrubs like privet (Ligustrum), barberry, variegated euonymus, Indian hawthorn, and Loropetulum. Can you even imagine an insect stopping by either of those two landscapes?

These plants offer very little to the passing wildlife. While owners are happy to know that insects pass right by those yards, the butterflies often pass by as well. There are no plants for the butterflies to lay eggs on. With a reduced insect population, there are too few insects for birds on the hunt so birds are fewer as well. Sure you might see a butterfly or two as well as a few of the adaptable birds like cardinals. But those visitors are nothing compared to the wildlife that is attracted to wild roadsides.


Fall roadsides in Georgia can be a bountiful buffet for wildlife. I love the burst of blooms from plants in the Asteraceae family as well as the wild grasses (family Poaceae).


I found a beautiful dry roadside the other day and stopped to observe it. The flowering plants were loaded with insects: butterflies, bees, wasps, beetles, and flies were busy enjoying the nectar and pollen those plants had to offer. The thoroughworts (Eupatorium serotinum and Eupatorium hyssopifolium) were in bloom along with the yellow goldenrods (Solidago).

After the insects are done pollinating these flowers (and in some cases laying eggs on the leaves themselves), the songbirds will benefit. They benefit now from eating the caterpillars that come from the eggs, and later they will come back to eat the many seeds on these plants (many tiny flowers make many tiny seeds!). The Carolina wrens have had a feast at my house this year on the caterpillars on the goldenrods.


A little further down the road, I found a damp/wet roadside. It was filled with a different group of plants: ironweed (Vernonia), jewelweed (Impatiens), wingstem (Verbesina alternifolia), goldenrod (Solidago), Clematis virginiana, passionflower (Passiflora), and more grasses.

So when you’re considering plants to provide more fall nectar, pollen and even insects for the wildlife you love, think of the wild roadsides. Remember the members of the Asteraceae family: black-eyed Susan (Rudbeckia), sunflowers (Helianthus),  goldenrods (Solidago), the thoroughworts and Joe pye weed (Eupatorium), and so many others - even asters themselves. Each of these provides nectar and pollen for insects, plus caterpillars and seeds for songbirds.

And if you've got a little piece of wild roadside, please don't mow it until spring. So many critters will thank you.

Long live the wild roadsides!
Posted by Ellen Honeycutt at 7:55 AM 8 comments: